Today we docked in Malaga at 12:00 where Alex and I spent several hours exploring and soaking up the atmosphere of this popular coastal resort. We spent a few hours in the the Sky Observation Lounge then had a wonderful dinner in Tuscan Grill. Entertainment was from the Celebrity Eclipse cast.

A late night last night, combined with clocks going forward as we sailed into the Mediterranean Sea, meant we didn’t wake up until after 09:00 this morning. The long sleep was very refreshing and I spent a short while posting the blog from yesterday before breakfast. We ventured to the Oceanview Café for breakfast this morning, but were too late for the main sitting so there wasn’t much left for us. We still managed a few pastries which we enjoyed while watching the skilful crew manoeuvre this giant ship into the port at Malaga.

We had pre-booked a CitySightseeing bus for Malaga, and have used these buses many times before. I’m a bit of a fan, but won’t be donning any of their red polo-shirts anytime soon! The pickup for the bus was just a short walk from where we were docked along a rather nice road with the coastal hotels and flats exploding in size as we got closer to the main area.

The bus was OK, but (for reasons I can’t quite put my finger on) was not as good as previous CitySightseeing tours. The audio commentary was still informative, but because Malaga is such a large, busy city, it was sometimes difficult to find quite the building or sight that the commentary was referring to. Still, we did learn a few little facts along the way, and the bus is still a great way of getting around the city, especially if you want to visit some of the more out of the way sights. The tour takes about 90 minutes from start to finish.

When we first arrived in Malaga and walked up to the lighthouse where the CitySightseeing busses depart from, I was not at all impressed with the city. The beach fronted buildings are quite run-down and it has a dated, British holiday vibe to it that I wasn’t particularly keen on. It felt a bit like a holiday ghost town, and there are many concrete monstrosities that have not stood the test of time at all lining the beach. Thankfully I didn’t give up on it, as the good stuff is set back from the beaches.

We got off the bus and walked right into the cathedral area, and there Malaga’s beauty and fun can really be found. There are many wonderful alleys which have a very historic vibe, and with the stunning cathedral looming overhead you are transported back in time. Of course there are many modern bars, cafés and restaurants, and the European street-café culture is just as prevalent here as in any other mainland-European city.

There is quite a mixture of architecture in Malaga, presumably the result of many different periods of occupation by a variety of civilisations on the Eastern Mediterranean. I’m not architecture expert, but I enjoyed seeing the variety of older buildings on show in the tight streets and plazas of Malaga.

We ended our self-led walking tour of Malaga with a stroll around the lovely park near the port, and some coffee and tapas at a forgettable little place near the marina (that’s what happens when you don’t have TripAdvisor to guide you). Still, we had a very relaxing day in Malaga that, when given a chance, charmed me in the end.

We were only here from 12:00 until 18:45, but with a full day to explore I’d consider touring the Castillo de Gibralfaro to see all of the military exhibits in the museum there, and to get panoramic views of the city from the walls of the castle. If you have never visited Malaga before, and aren’t interested in the Castle, the rest of the city (and Cathedral) is walkable for any reasonably able-bodied person. I wouldn’t particularly recommend the CitySightseeing bus in this case, as I much more enjoyed soaking up the little streets and shops that the city has to offer. 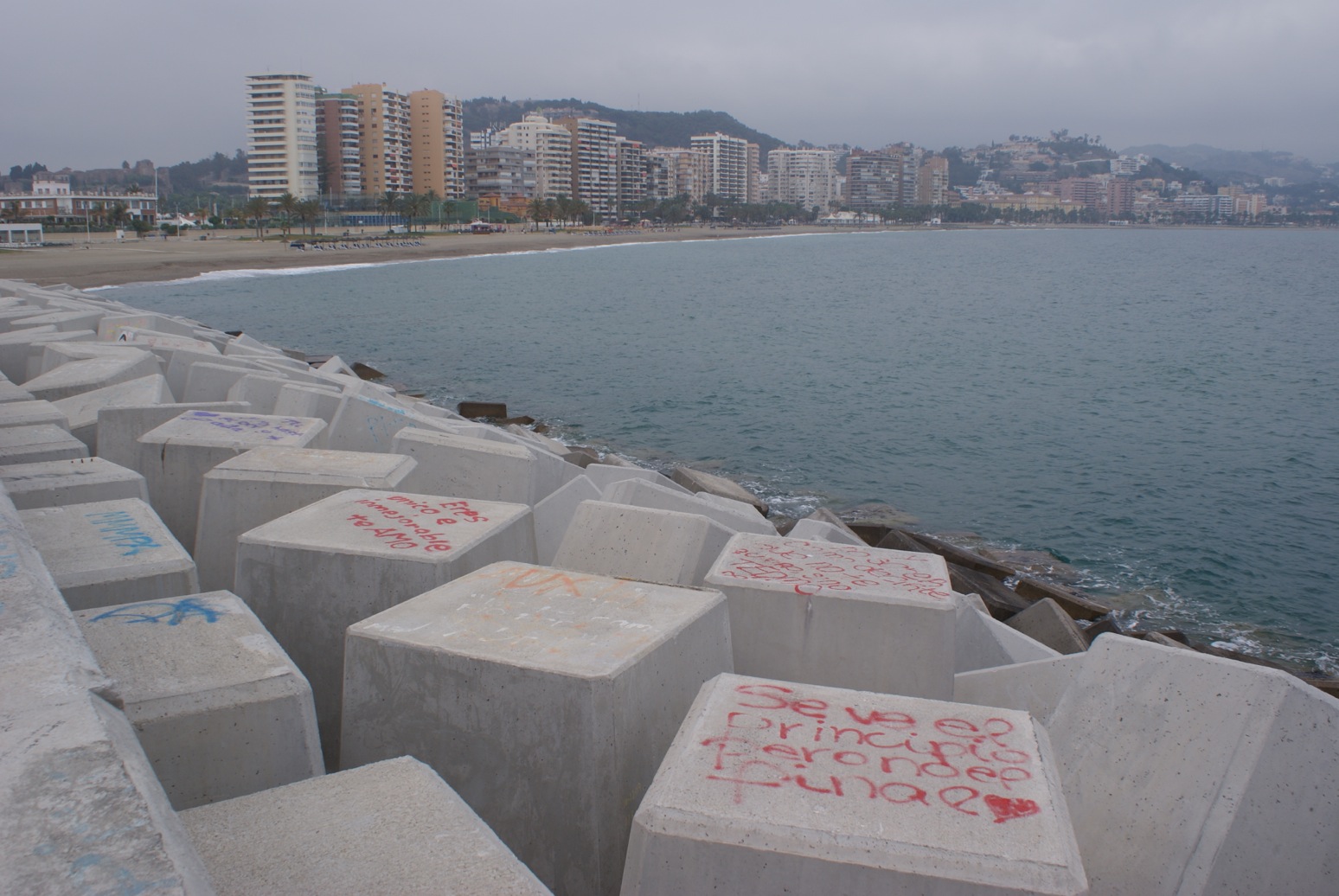 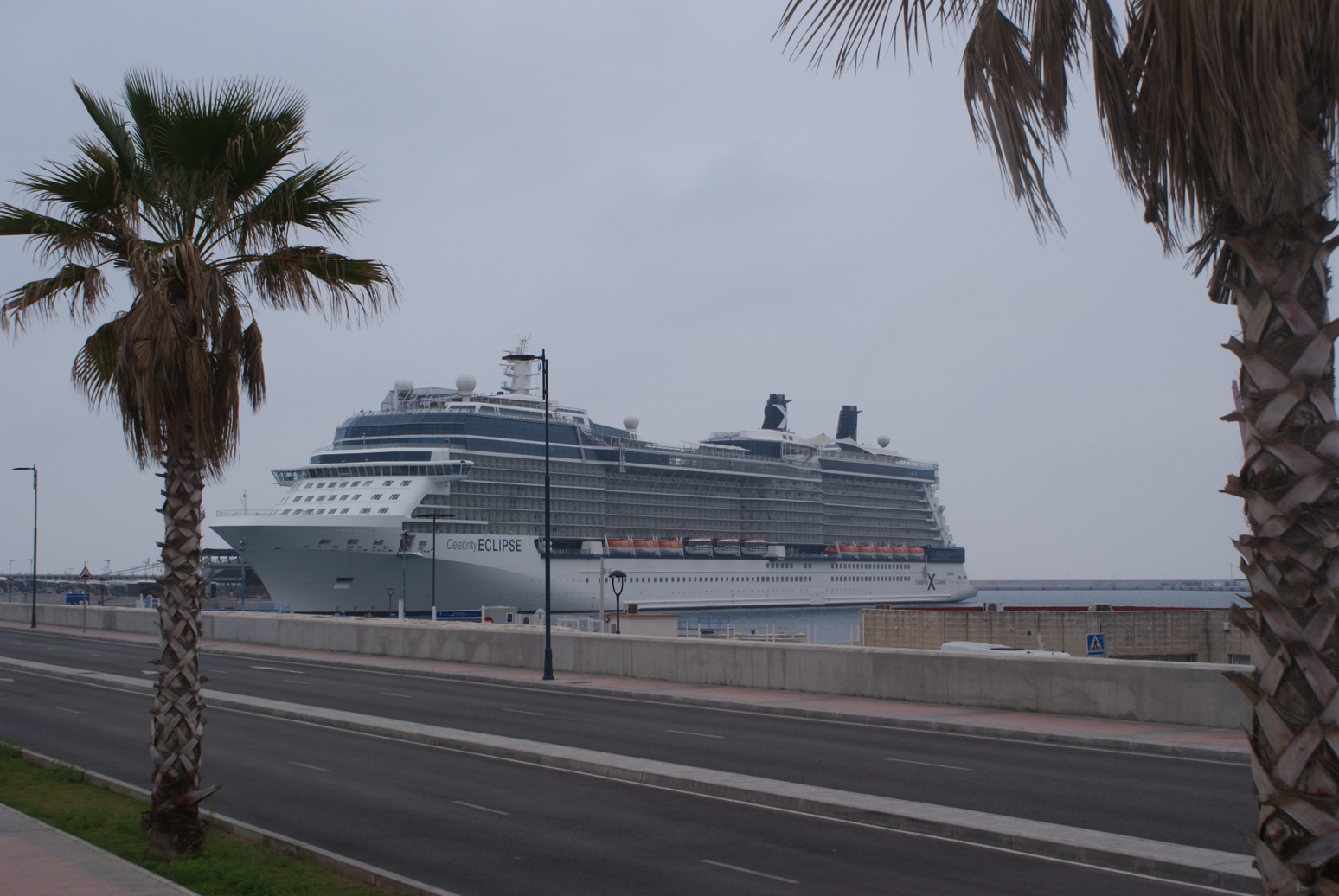 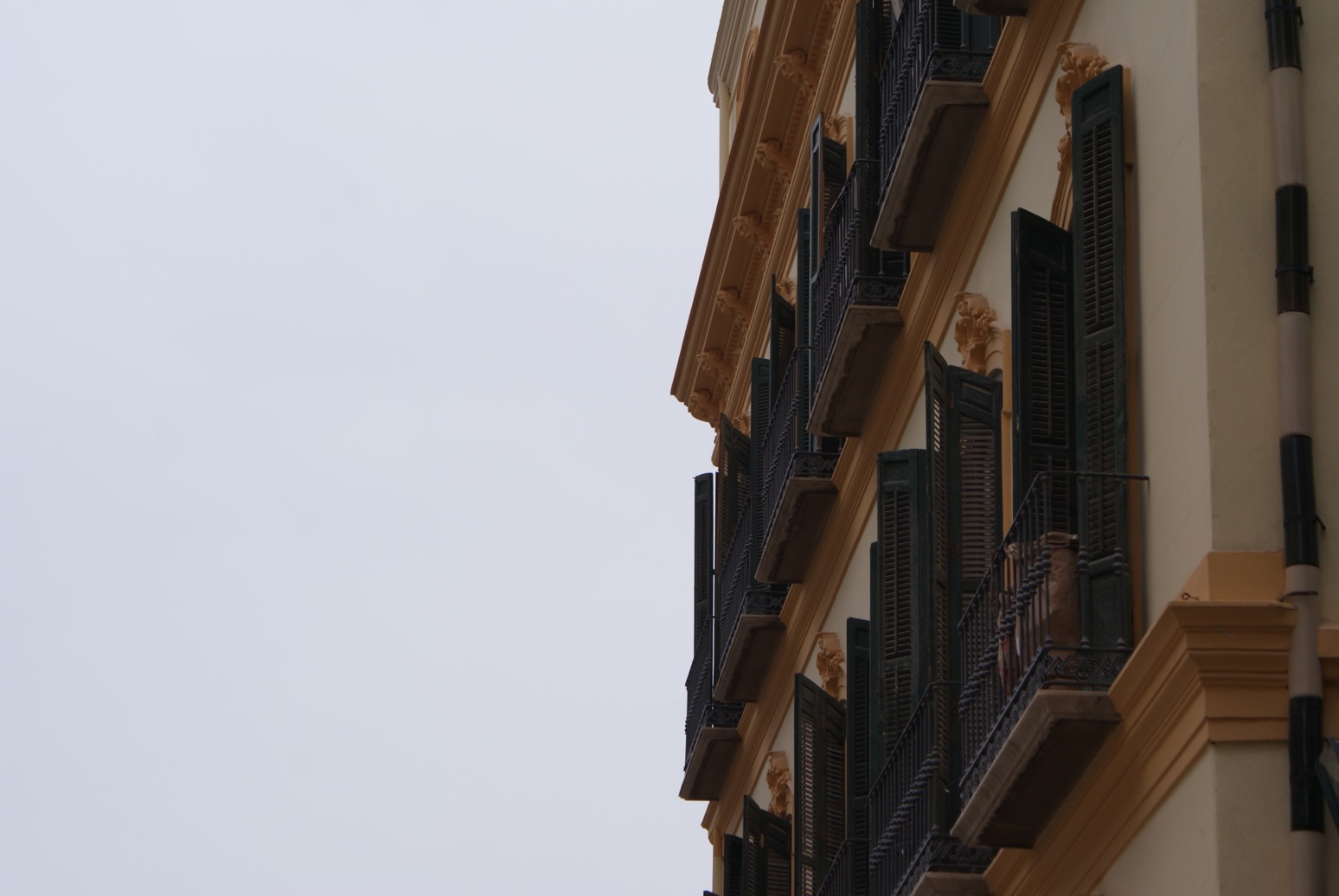 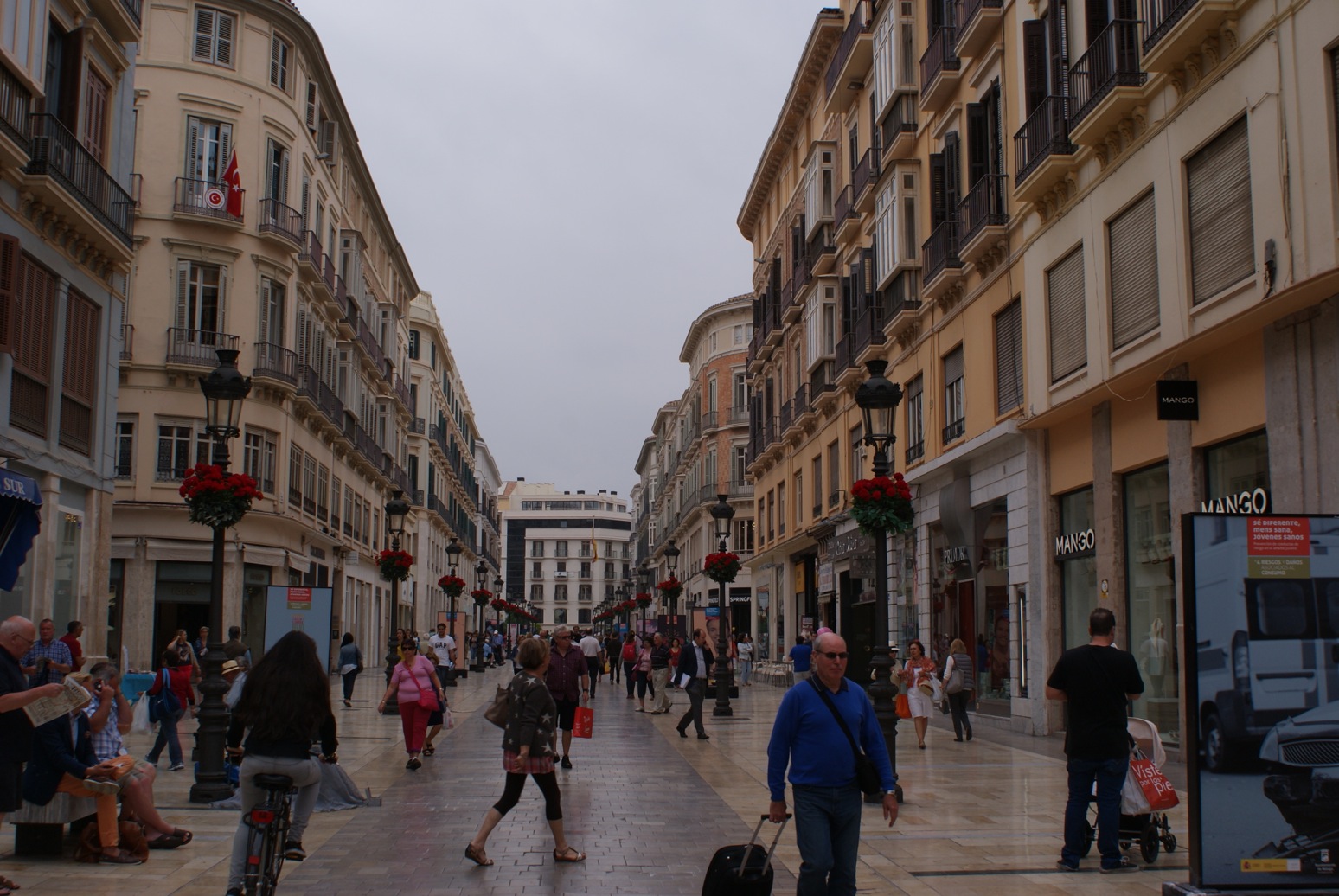 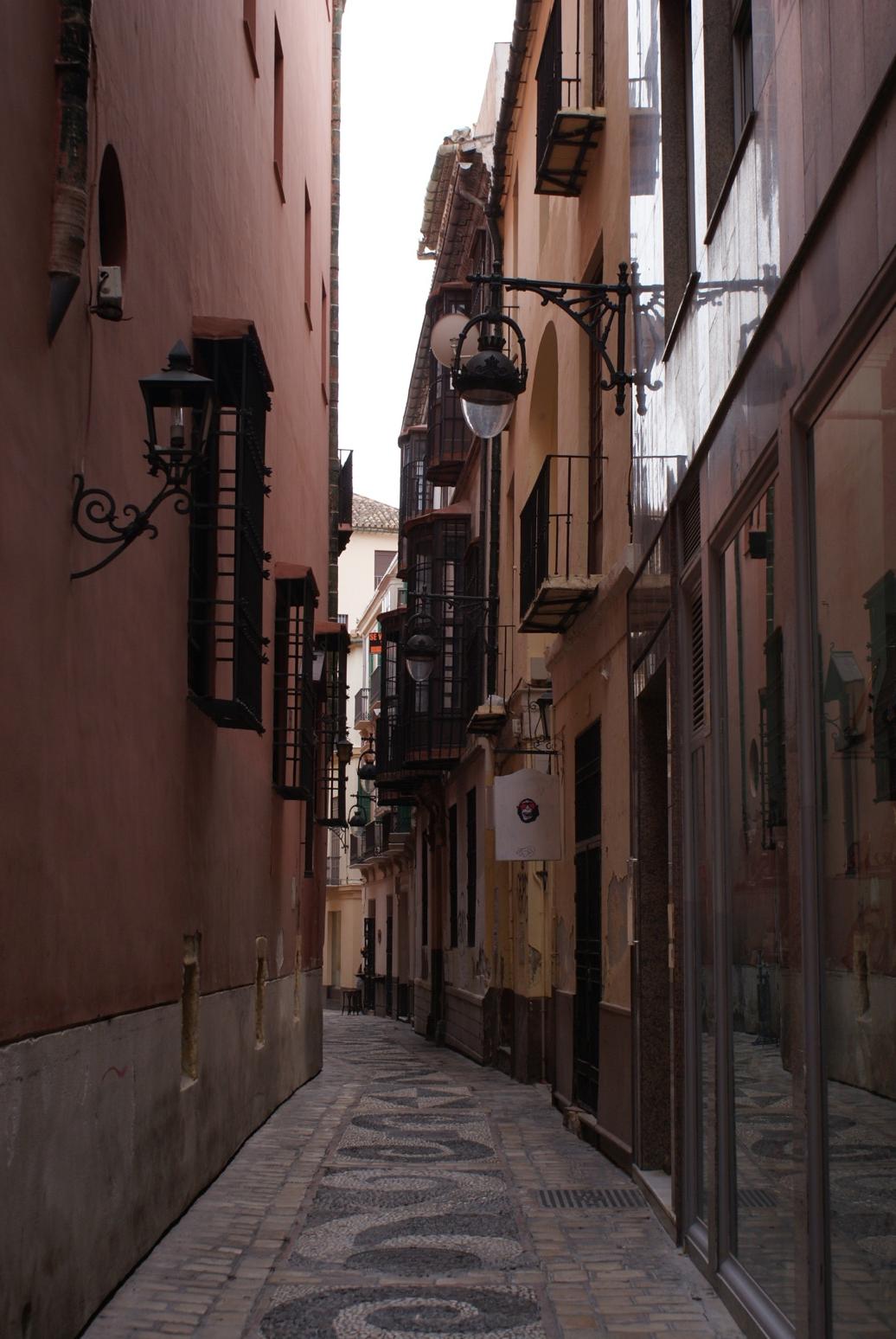 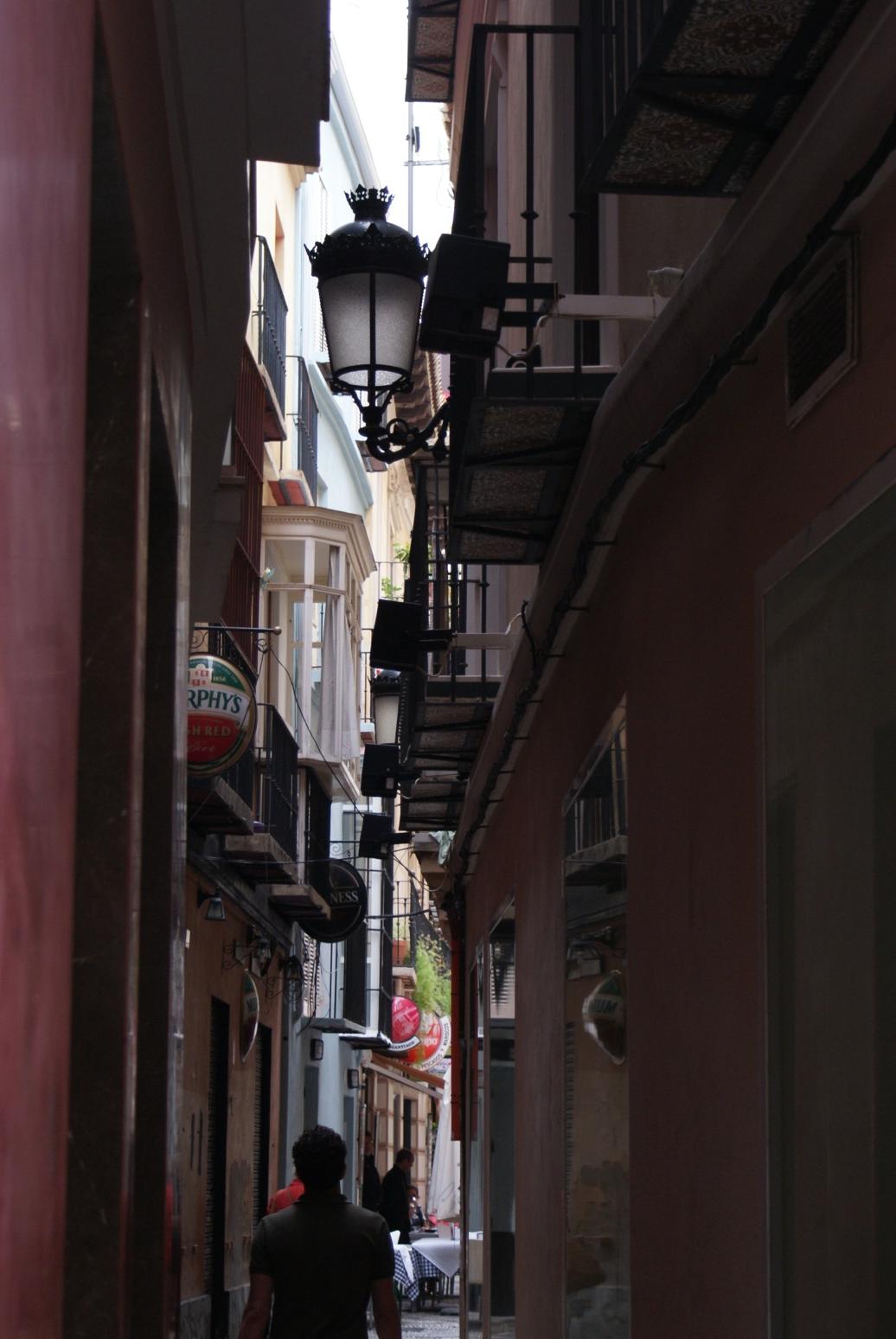 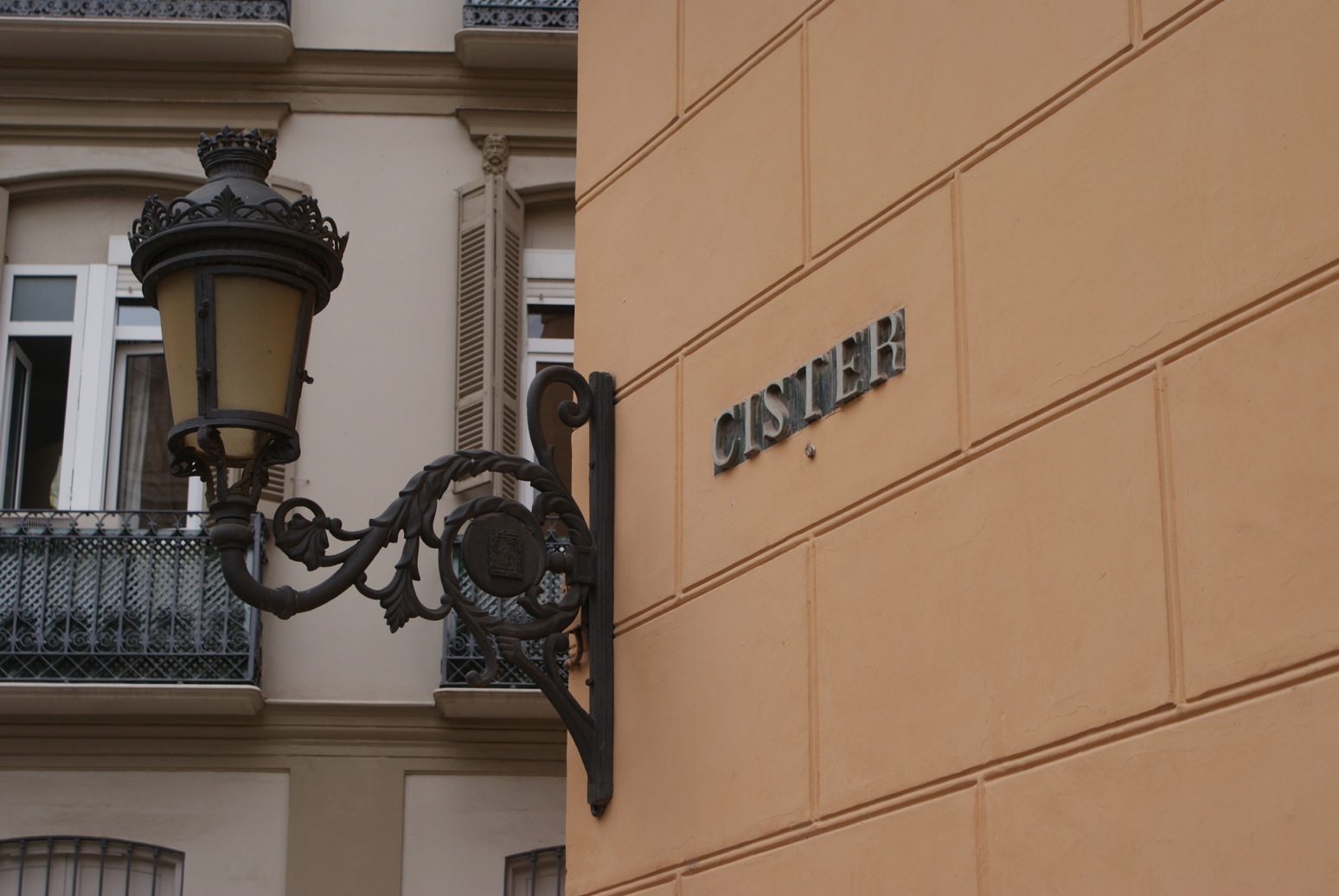 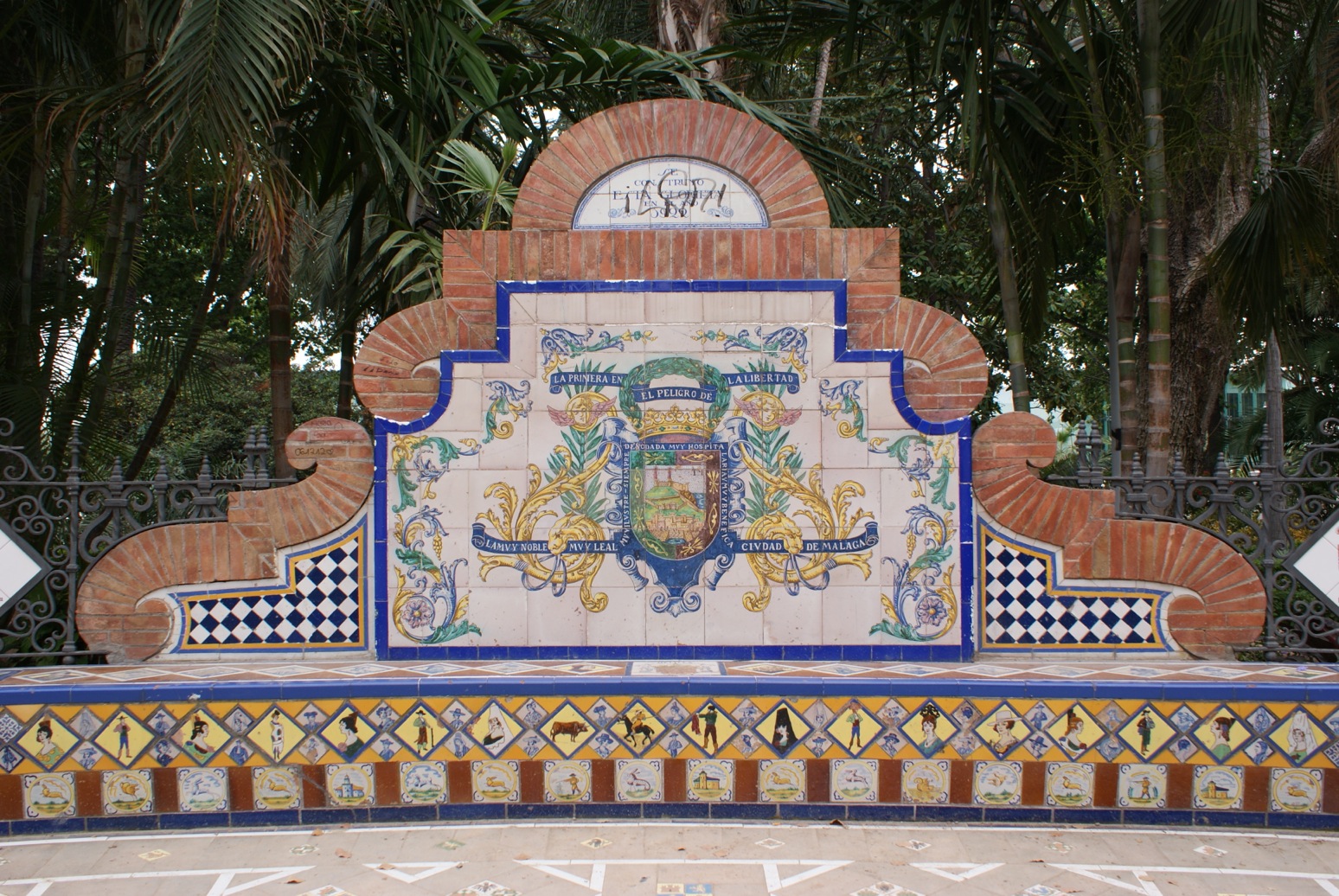 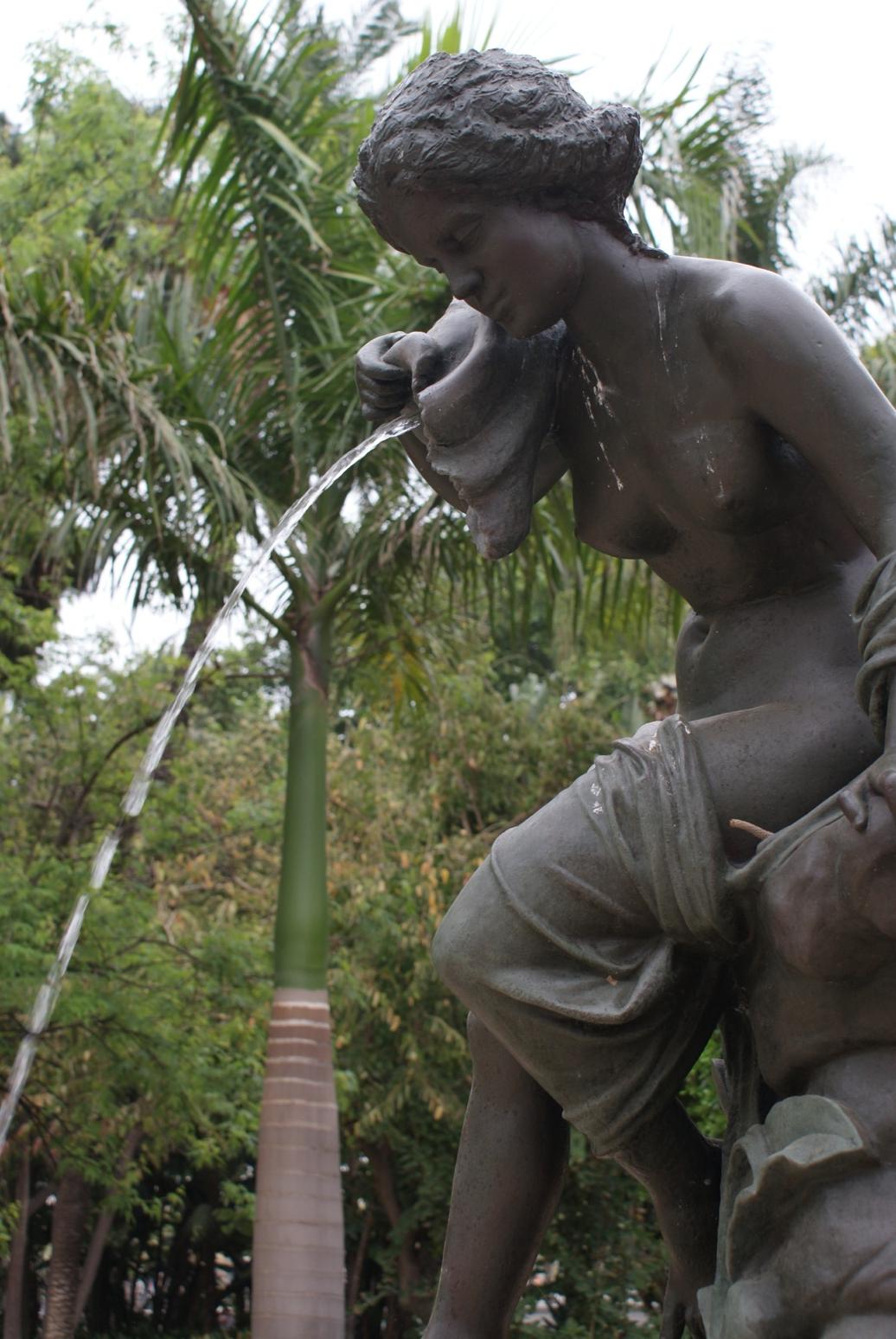 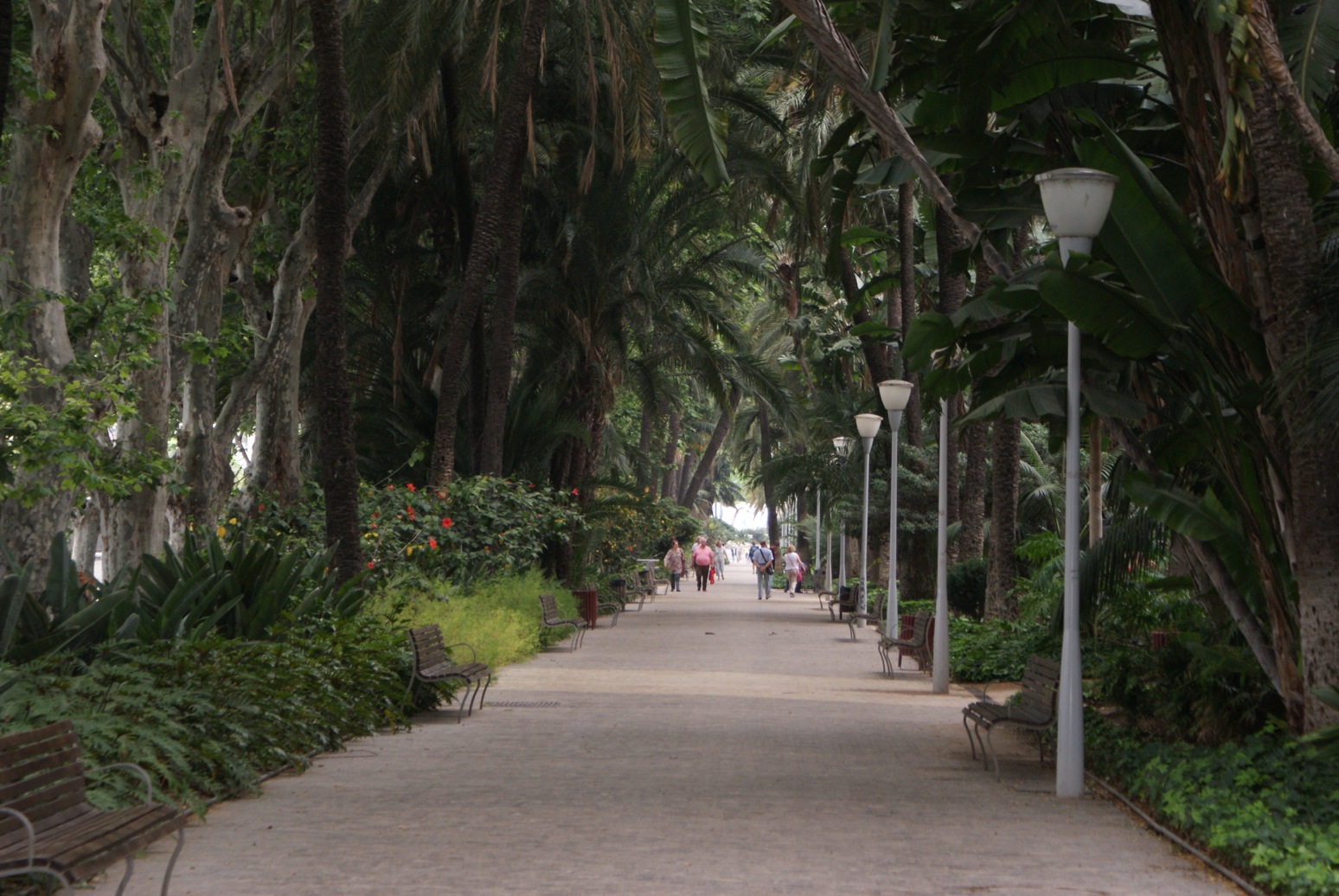 Once again we visited the Sky Observation Lounge to do some reading and relaxing with a nice cocktail, and once again we had friendly and prompt service, and managed to get a seat right at the front in the middle. At the time we were there (17:00 – 18:30), pre-dinner service was in full force, and we had a wonderful range of hot and cold canapés on offer, which were delicious. If you really wanted piece and quiet, or were fully engrossed in a book, this could be seen as intrusive as there were several members of staff on canapé distribution duty. We joked that they must be running a competition for time off to the server who got rid of the most canapés in one evening! As we were watching the world go by, a few staff members were doing the rounds and interacting with guests. We had a lovely chat with Graham, the Captain Club Host, who gave us some tips for Tuscan Grill, and made friendly small-talk before moving on. He really made us feel welcome and part of the Celebrity club. Shortly after Alex went to change for dinner, I was joined by a lovely Scottish couple living in Suffolk, who I chatted to before we were approached by Sue Denning (cruise director) who was also doing the rounds. I didn’t get much chat with her, but she was chatting away to my new table companions quite happily. I was hoping to have a chat with her to learn more about the different approaches she uses when preparing for the UK season compared to the US season. I have a suspicion that Celebrity (or maybe just Sue) make quite a lot of effort to make Celebrity as British and experience as possible when sailing from the UK. In any case I didn’t seem to manage to chat to her, and I had to excuse myself shortly after for dinner.

This morning after breakfast we purchased the 3-dinner package and booked our first meal in the Tuscan Grill. The package will give us one visit to the other two restaurants on board too, so look our for that later in the blog. The last time we were in Tuscan Grill was on the first night of our 8-night Norwegian Fjords cruise last May, where our pre-cruise diet meant we couldn’t stomach the sheer quantity of food on offer.

Tonight, we were seated by the window almost right in the centre of the rear of the ship. Tuscan Grill enjoys the best position of all of the restaurants on the ship, right at the back of Deck 5, overlooking the wake of the ship. The wine list was different from that in Moonlight Sonata, and as I was eating mostly red meat, I enjoyed a rather nice red wine which was free-flowing on my Premium Beverage package.

For dinner, I started with steak tartare, then had a goats cheese salad, the filet mignon, and finished with the tiramisu. Alex opted for the french onion soup, the filet mignon, and the dark chocolate fondue. All of the food was delicious, though some of the crisps served with the steak tartare were a little soft. I have also perfected a recipe for steak fries (potato wedges) that left me disappointed with Tuscan Grill’s offering (despite the addition of shaved parmesan, which has been duly noted!) Nonetheless, we enjoyed every bite.

One thing I thought was a little disappointing on the wine list was a lack of desert wine that was available in even the Premium Package (up to $15 per glass). The only thing they had was a sweet, sparkling, rosé, which I reluctantly tried. Thankfully this was right up my alley and I subsequently enjoyed a second glass! Nonetheless, for those favouring a sticky wine with desert, be prepared to pay over and above your package, even if you went premium. 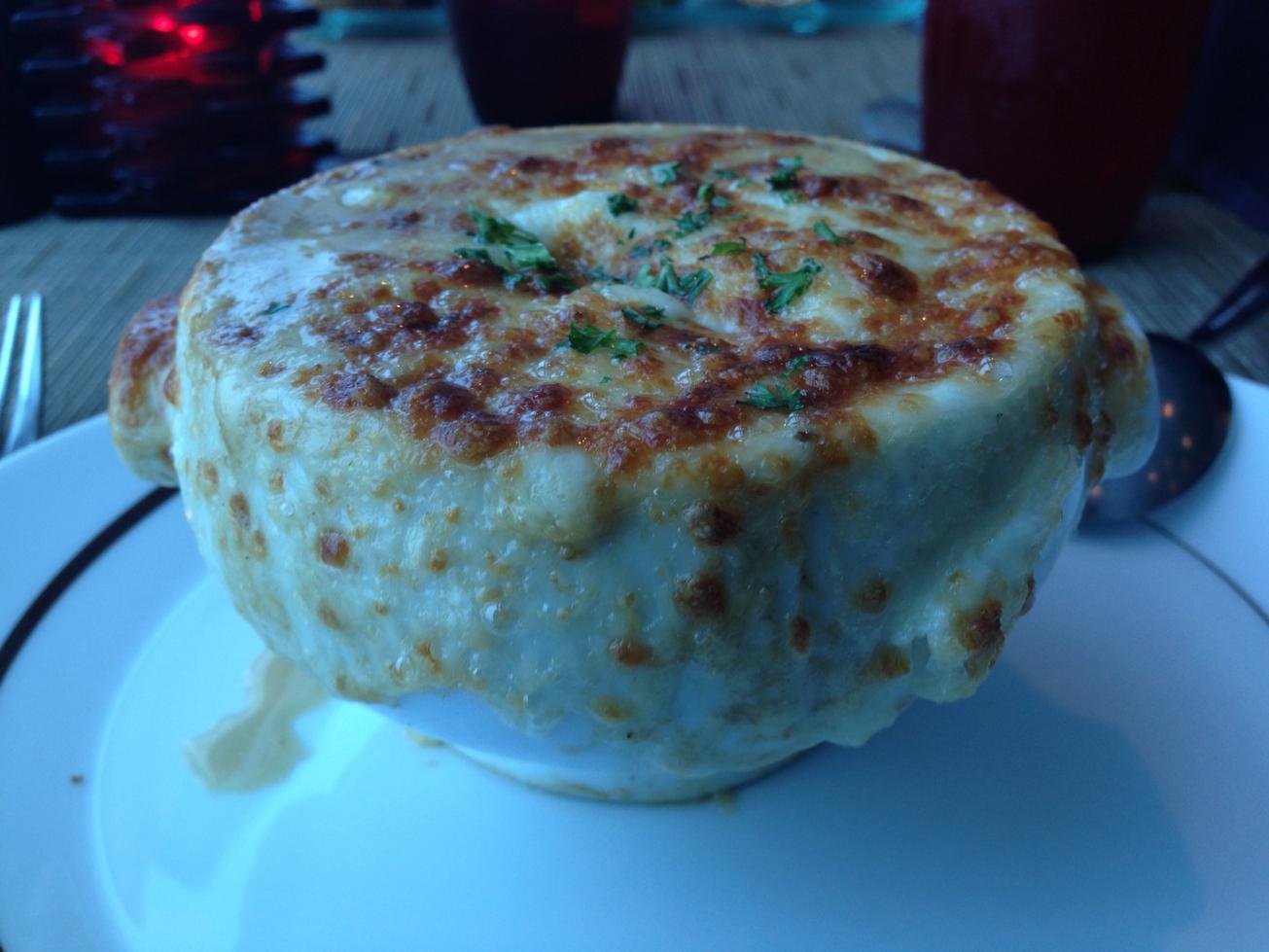 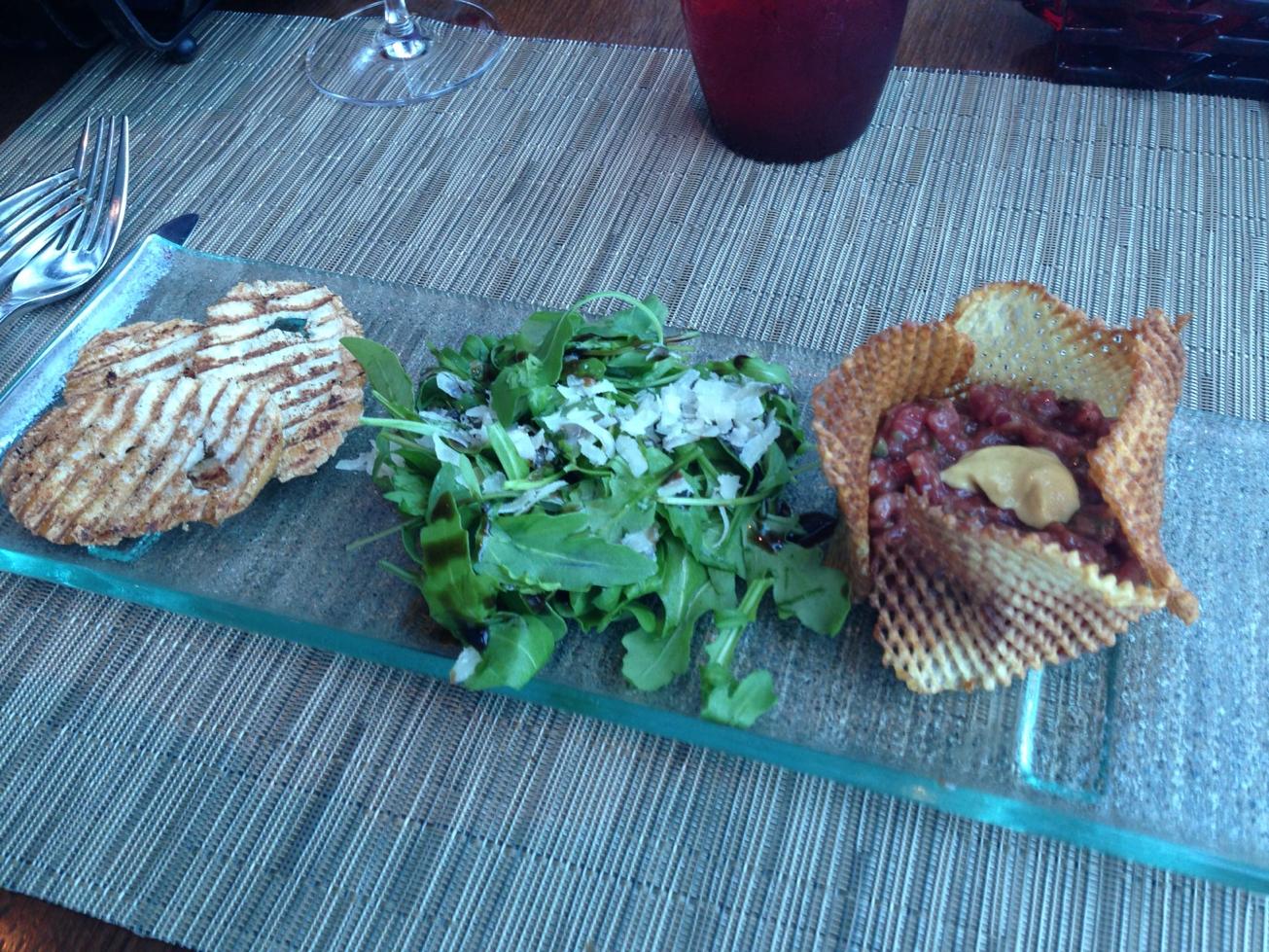 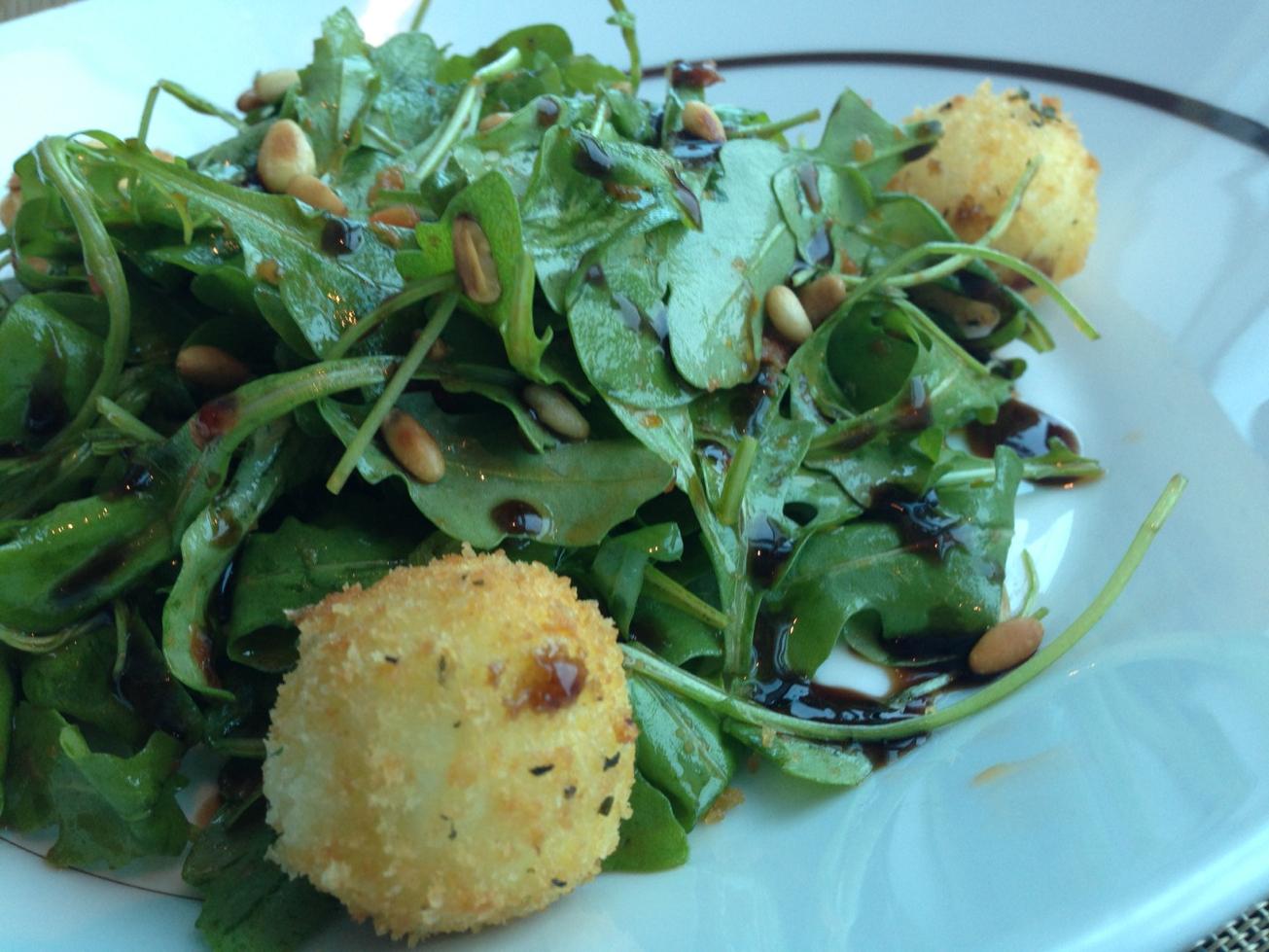 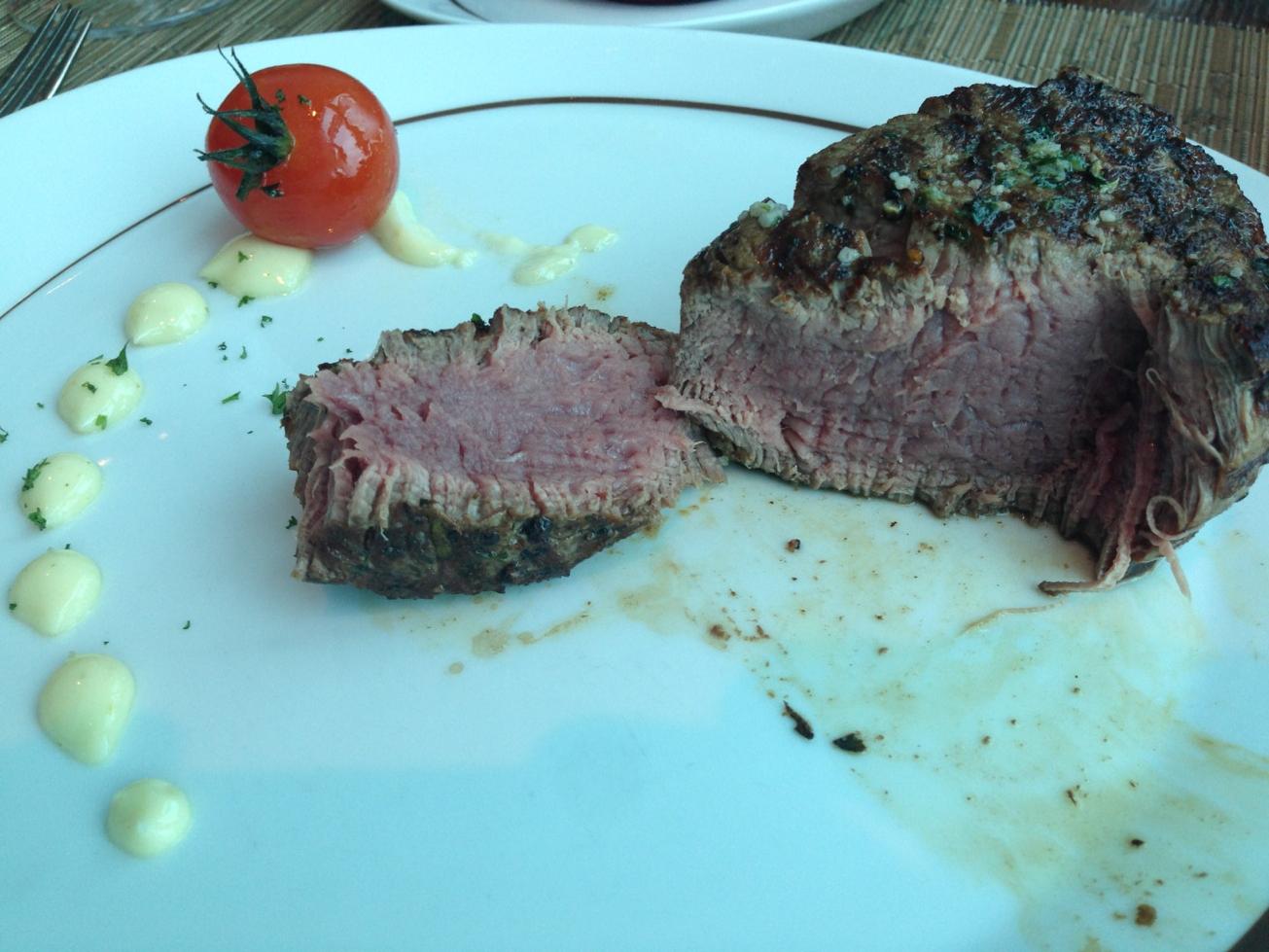 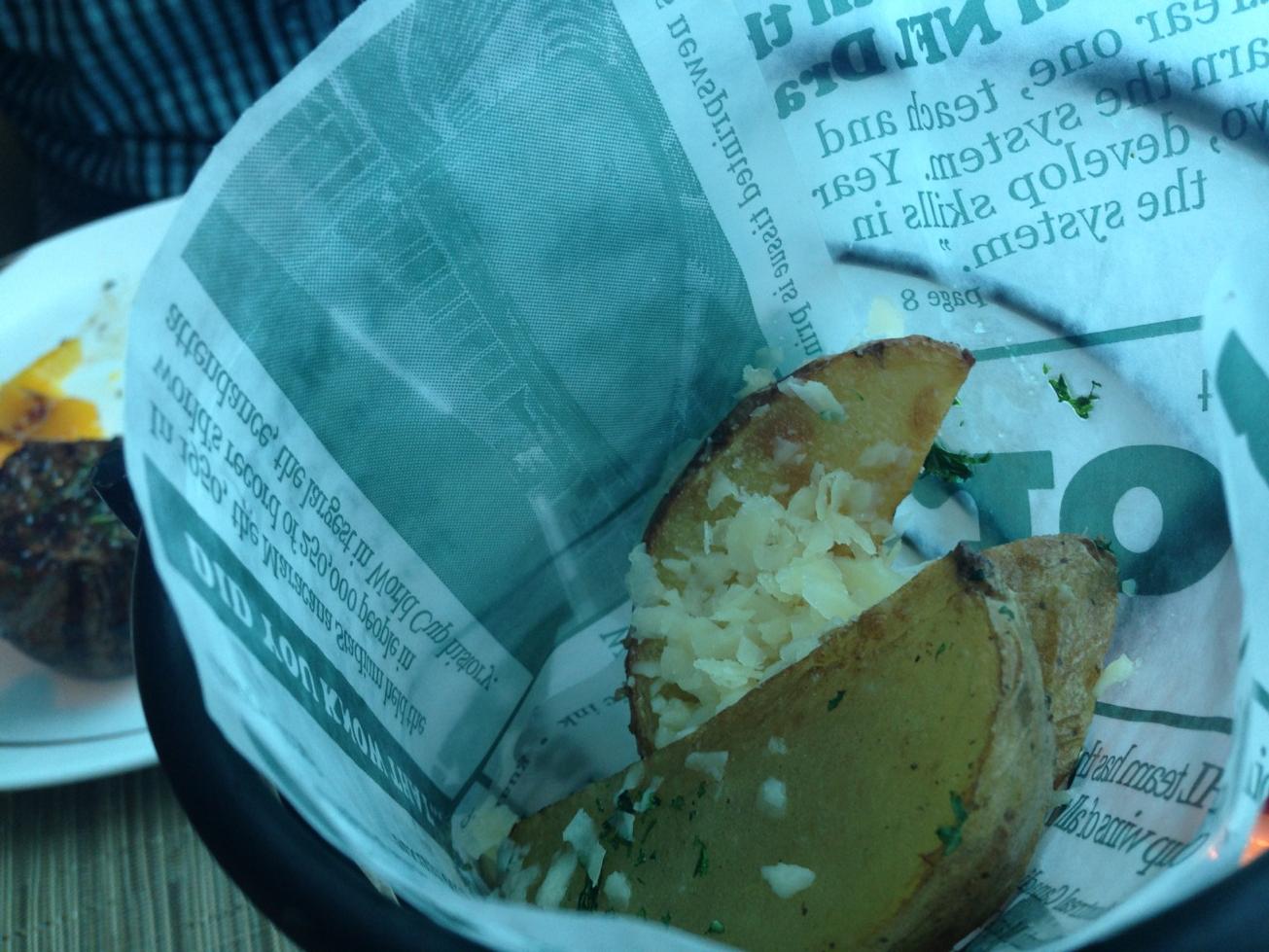 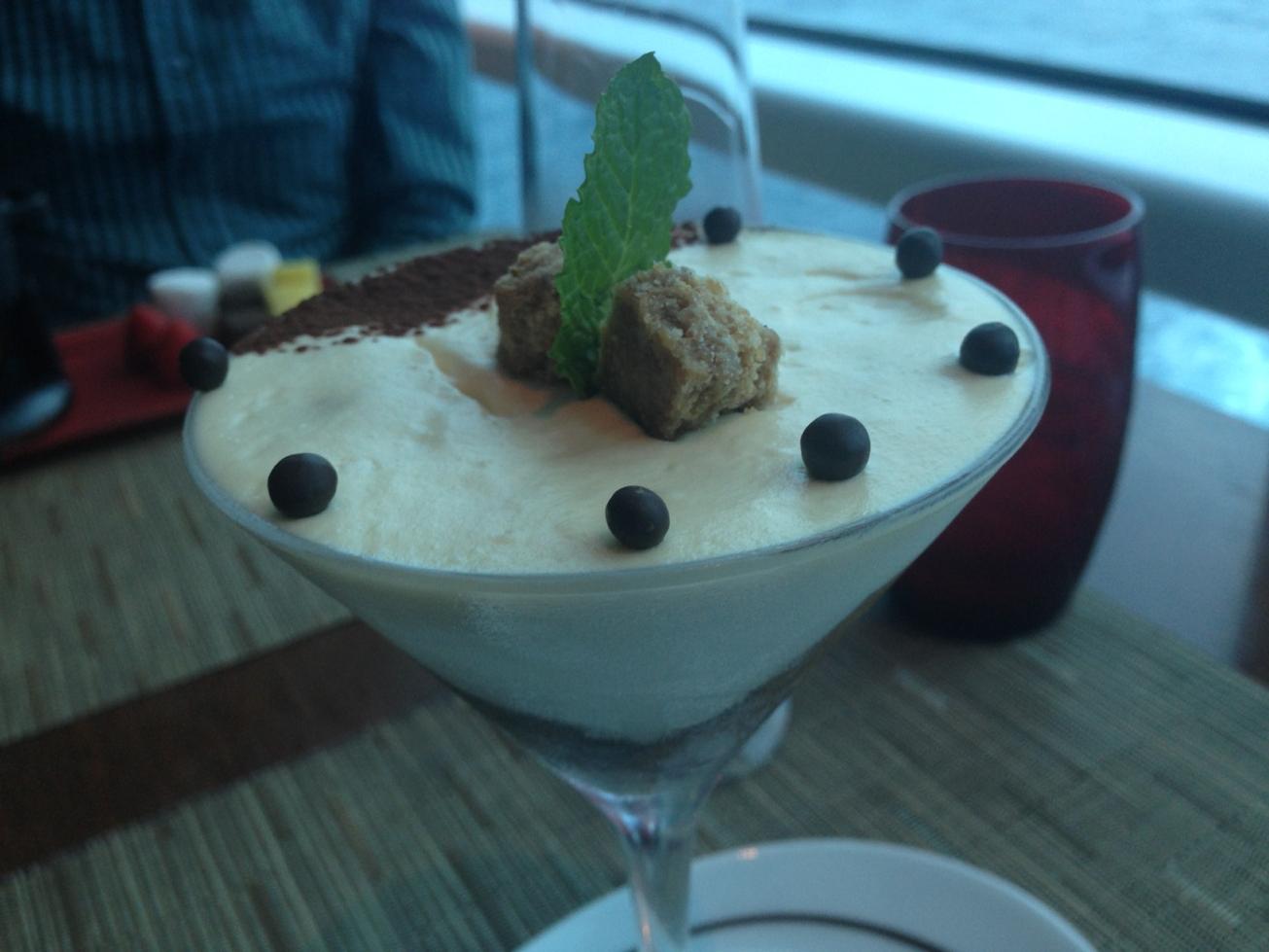 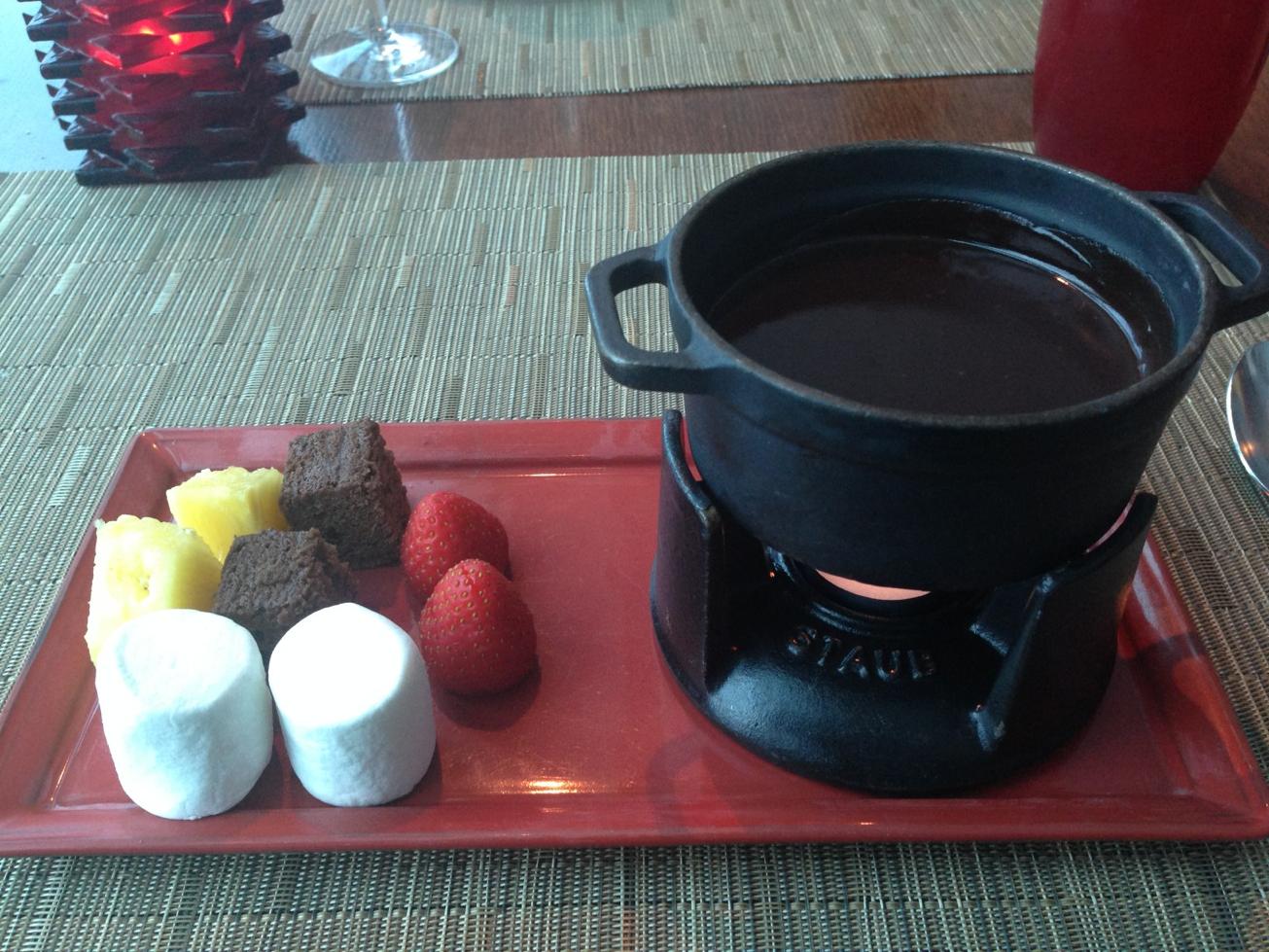 Tonight’s theatre show from the Celebrity Eclipse cast was called Edge: The Show and featured a number of songs spanning decades and various genres. The show really demonstrated the versatility of the theatre and, more specifically, the stage of this ship. It has several rotating and rising platforms, and the LED set pieces that have been used allow a great degree of flexibility in the feel or theme of each segment of the show. It’s not only the versatility of the theatre that was on show tonight, but also that of the cast. Not only were they singing and dancing well, but many of them also took to the skies doing a variety of aerial acrobatics over the crowd.

I’ve included a small gallery of photos, but of course the show has to be seen to appreciate the full splendour of the production. 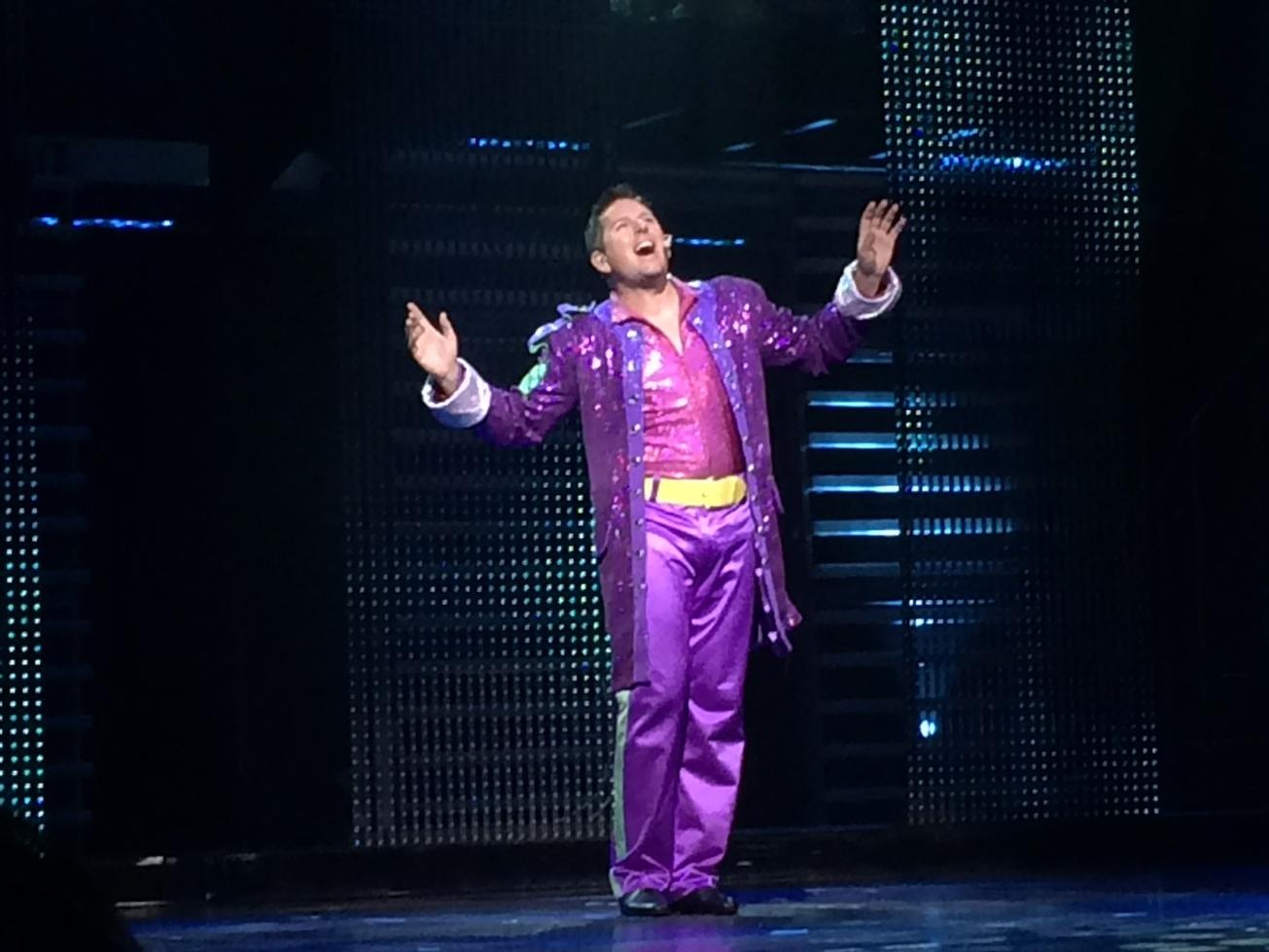 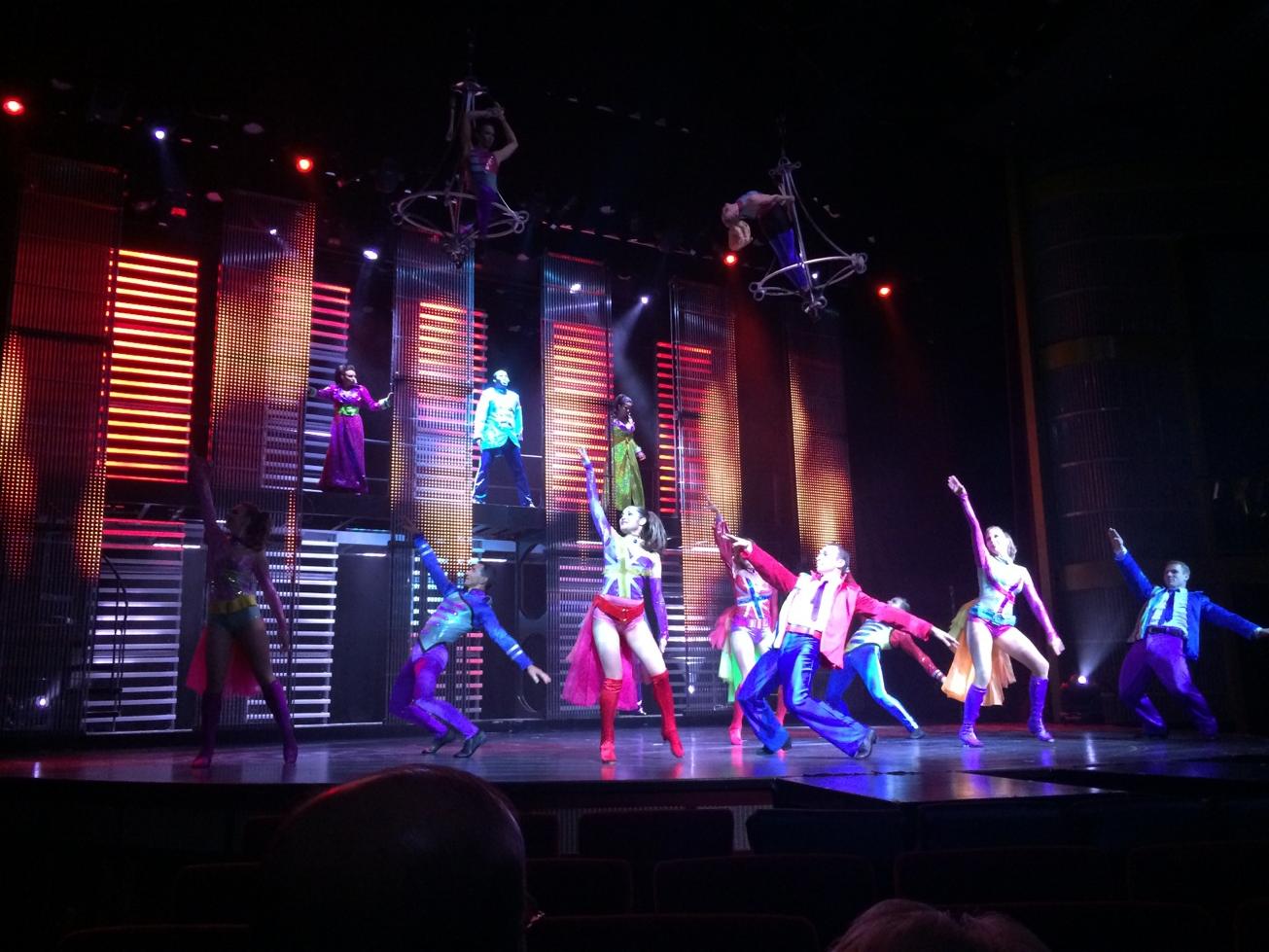 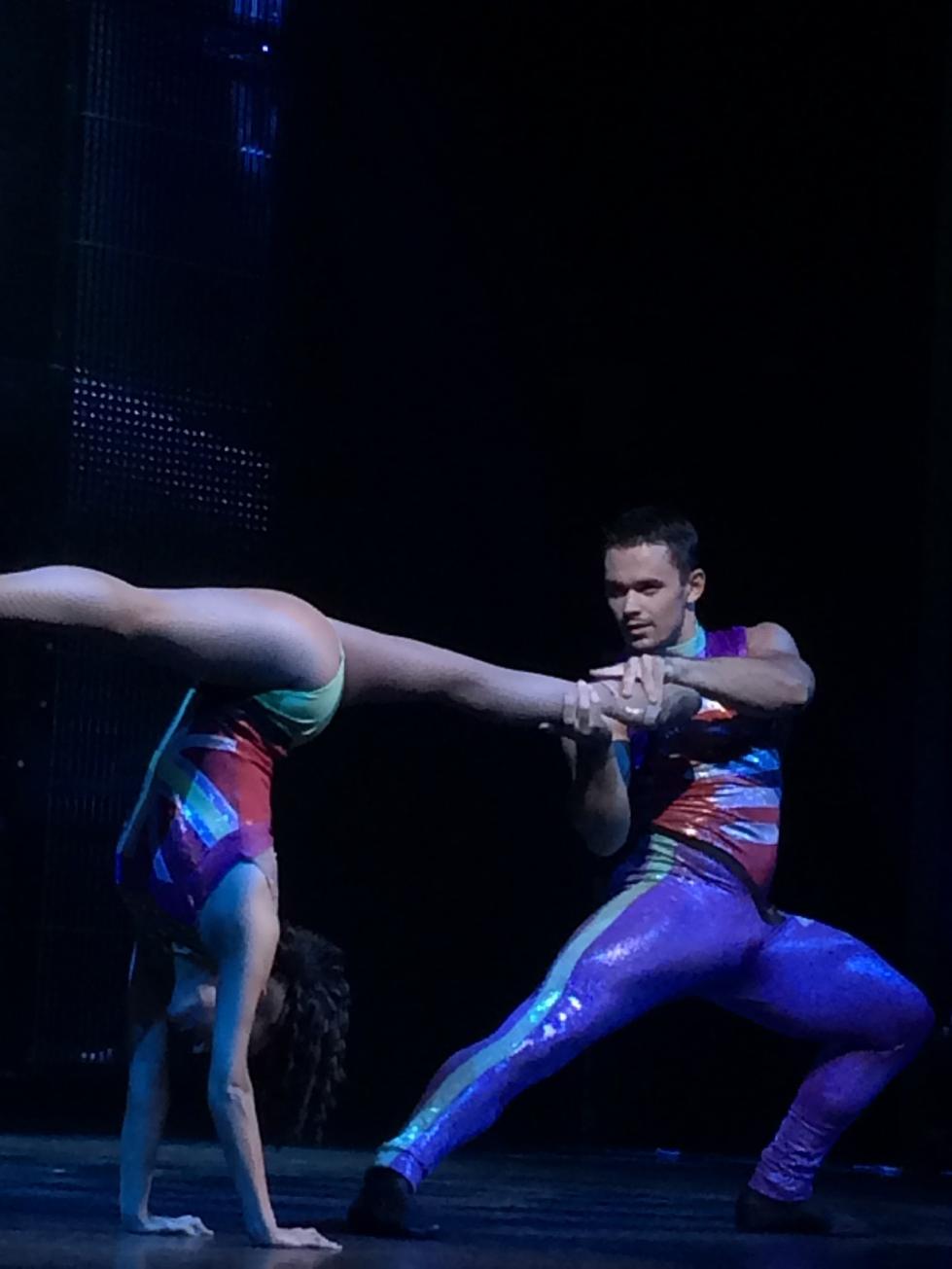 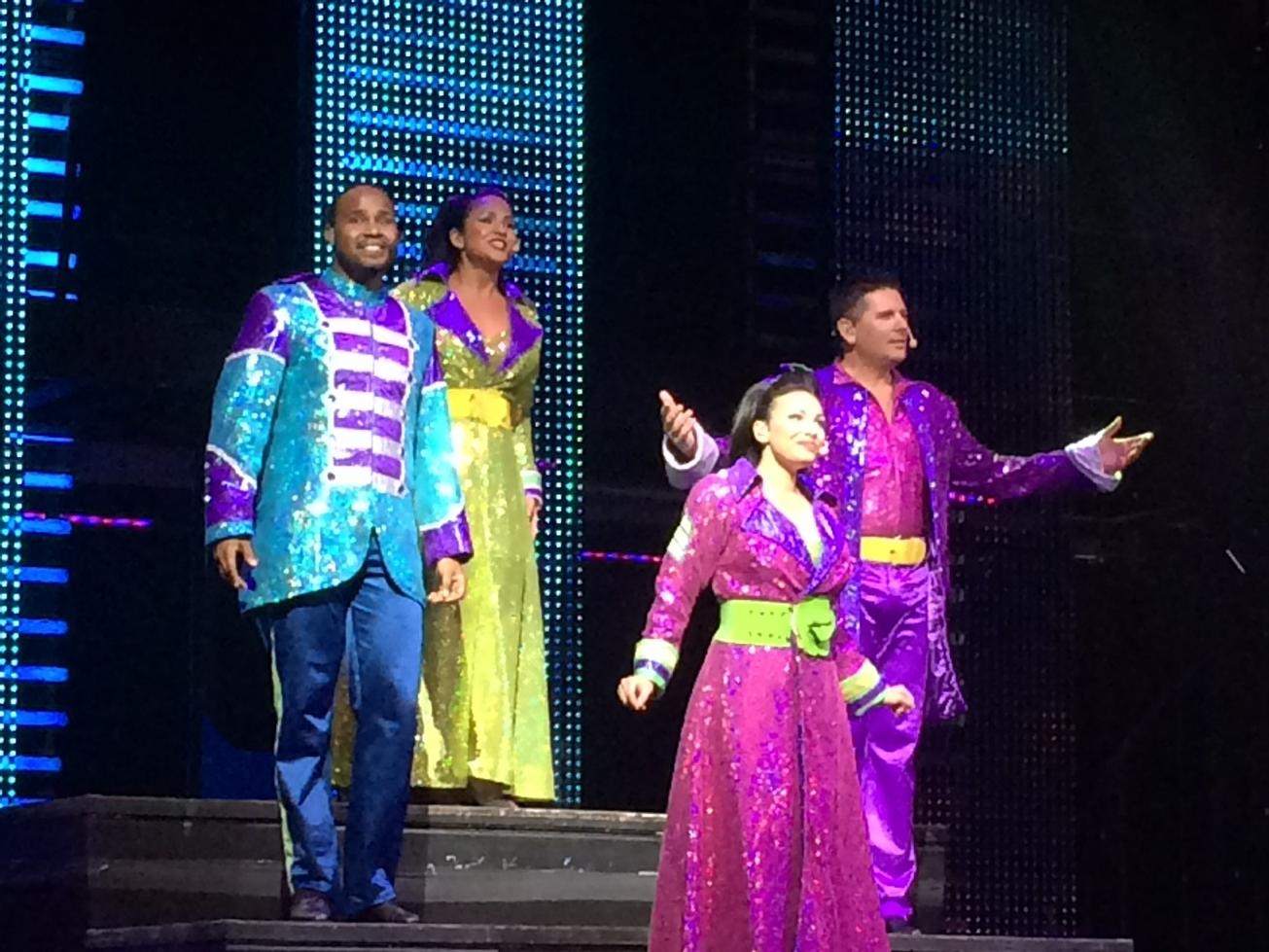 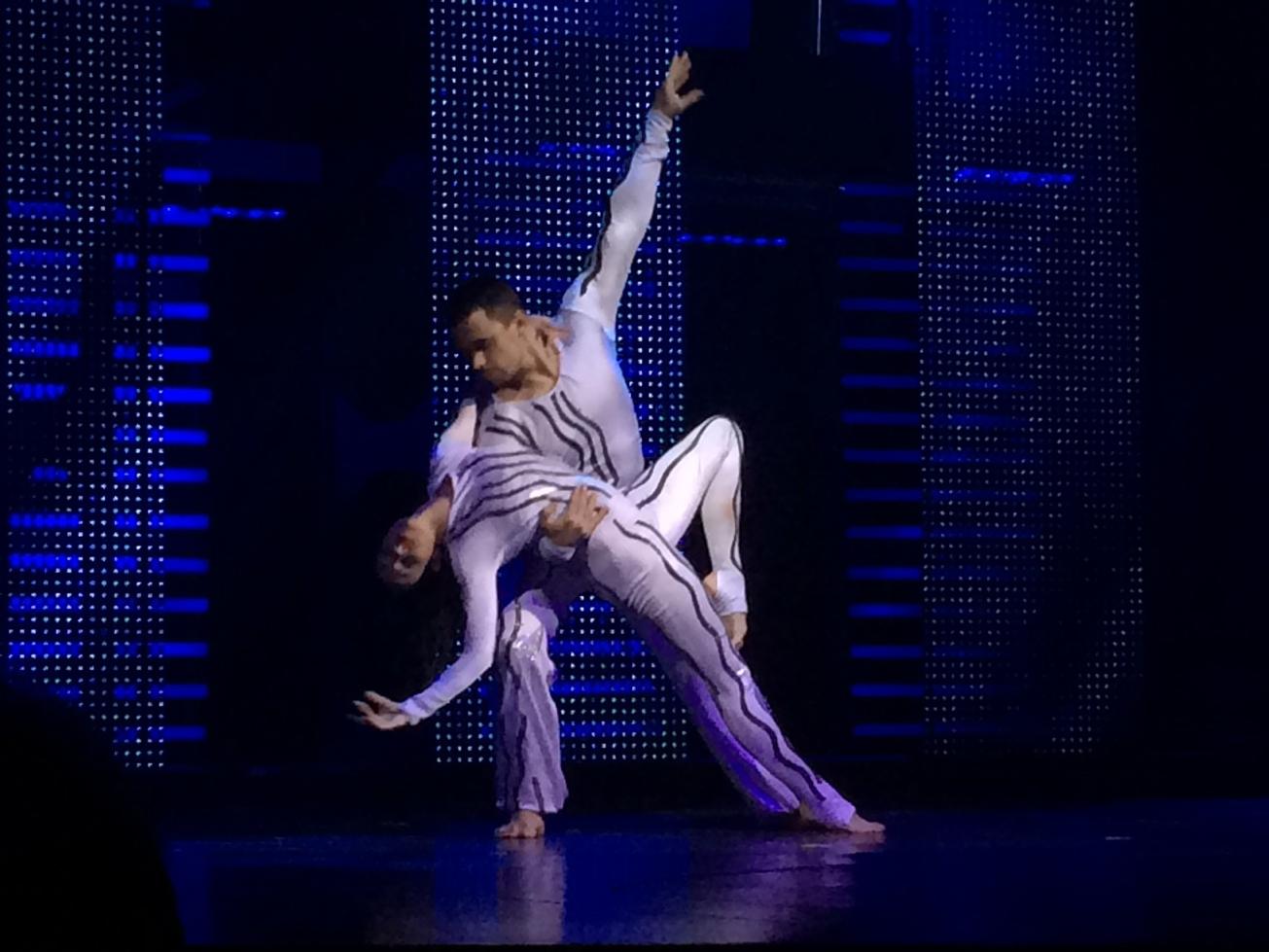 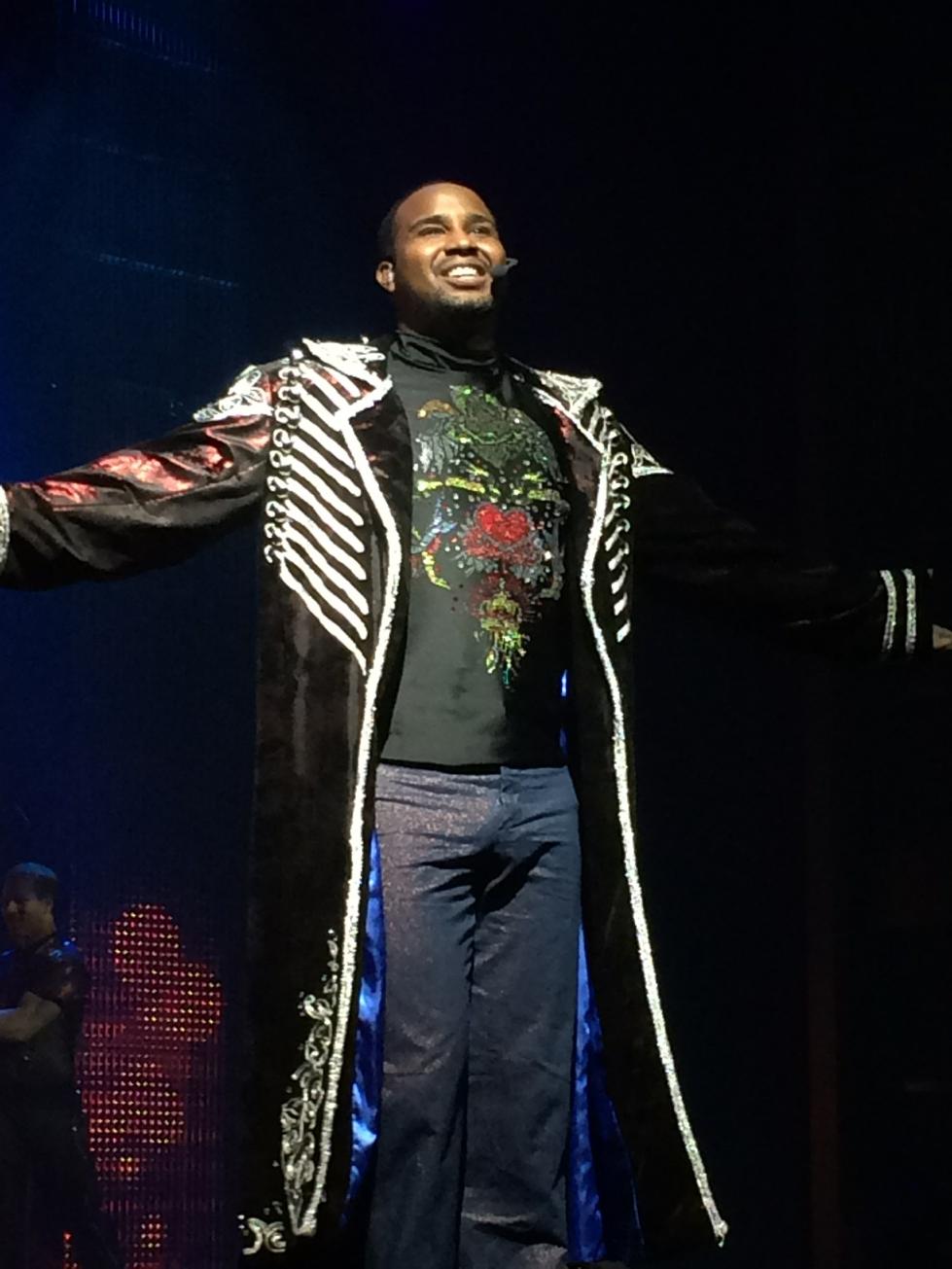 After the theatre we paid our first visit this cruise to the Molecular Bar on deck 5. If you don’t already know, the Molecular Bar sells the crème de la crème of mixed beverages on Celebrity Eclipse. Once you’ve selected your cocktail from the expansive menu, a specially trained mixologist will craft your drink using many interesting and fresh ingredients not found in any of the other bars on the ship. I went for a Lucky Cat, while Alex opted for a Hawaiian Lava. Both were delicious!

On our last Celebrity Eclipse cruise, the Molecular Bar was often empty, and it does not enjoy a particularly good location on the ship. Drinks are $15 each so, while they’re included in the premium drinks package, perhaps many cruisers on the classic package may prefer to drink elsewhere for free. In any case tonight there were actually a few tables of people enjoying the available creations, so perhaps the quality of the cocktails on show is slowly making this out-of-the-way venue a little more popular?

Another forum members who I’d been looking forward to meeting at Monday’s Celebrity Connections event was there, and came over to say hello (the benefit of having your photo on the forum!) It was lovely to chat to him, and I look forward to seeing more of him and his partner during the rest of the cruise! After a quick flurry on the slots, I made one last pit-stop at the martini bar for a delicious chocolate martini to take back to the room, which is keeping me going as I write this blog… Delicious!