Today is our first of four sea days on Celebrity Infinity. This is more sea days than we’ve ever had on a ship before (double than the previous record, in fact) so it should test the limits of Celebrity’s enrichment and activities programmes (otherwise known as their ability to keep us entertained!) Todays activities included a couple of guest speakers, some fun in the Constellation Lounge, some token exercise in the fitness centre, and lots and lots of food! Slight embarrassment to start the day this morning. I decided that I fancied taking breakfast in the Trellis Restaurant (MDR on Infinity) which is over two decks. We arrived at the entrance on the lower deck to find a sign asking me to go upstairs where the restaurant was open for breakfast. More stairs… I’m getting hungry! I spotted a man at a podium and made a bee-line to get Alex and I seated. “Table for two please”, “Room number”, “3073”, “Ahhh yes Mr. Stevenson, please go to the Trellis Restaurant over the hall”… Cue my complete confusion!

On arrival at the paupers entrance to the dining room, I was faced with a lengthy queue, so decided to take breakfast in the buffet after all. I’ll try again tomorrow!

The buffet restaurant on Celebrity Infinity is called “Oceanview Cafe” and is on Deck 10 at the back of the ship. It has food stations positioned around the internal walls, making it easy to navigate (in that you can walk in a circle and cover everything) but also quite tricky to decide what you want, as by the time you’ve made a complete circuit you’ve forgotten what you fancied!

Thankfully my demands for breakfast (a toasted bagel with cream cheese and smoked salmon) were met quickly and without visiting more than two adjacent stations. Food was pretty good for a buffet restaurant; the coffee was mediocre (watery American stuff) and the fruit juice was from a machine (in other words, stick with the Apple).

All in all a speedy start to the day, and we managed to find a table relatively quickly, eat, and leave for our first bout of sea-day edutainment!

Beyond the Podium – Jim Kennedy

Jim Kennedy was previously the director of NASA’s Kennedy Space Centre (the name is a coincidence, of course) and has now devoted his retired life to space advocacy. He will be doing a series of talks on this voyage, all centred around space and including stories from his long time at NASA. The talk was very engaging, and included many stunning images taken from NASA’s Space Picture of the Day. He was a brilliant speaker and today gave a brisk history of space exploration, from the early adventures of both Russia and the US, to more recent multi-national ventures such as the International Space Station.

I can’t wait to hear more of his stories, and learn more about space travel and exploration. He’s a brilliant speaker and I’d recommend taking time out of your day if you see his name on one of your own cruises. The only downside was the technology in the Celebrity Theatre. Both sound and video cut out at one stage, and a technician had to get everything up and running again. This happened at a Behind the Podium session on our previous cruise too; I can’t understand why Celebrity can’t get this right, as they must do it on an almost daily basis! As Jim lost quite a few minutes to this technical malfunction, the second half of his talk was rather rushed as he clearly didn’t want to miss anything out!

A Taste of Infinity

Anyone that knows me will know that I love great food. I decided to attend the demonstration of the restaurants on board Infinity. There are three speciality restaurants on board – Qsine, SS United States, and Bistro on Five. All of these are on Celebrity Eclipse (although SS United States is called Murano on Eclipse, but looks to have an identical menu), and so I’ve dined in them all before.

So, why did I bother attending? Well, on Eclipse there were clearly issues filling the speciality restaurants, and at this presentation they were offering 50% off the cover charges for these restaurants. Today, however, they were only offering a 20% discount, and only on reservations for tonight. This was no use to us, so we decided to book the three dinner speciality package at $109 per person – a saving of 21% on the normal cover charge. This gives two visits to SS United States and one visit to Qsine.

In the mood for food, we decided to head to one of my favourite lunchtime hangouts from Eclipse, Bistro on Five. This casual crêperie offers fantastic food at a bargain basement $5 per head cover charge. Once again, the food was excellent. I don’t have any pictures this time, but you can be sure I’ll be back here several times before the cruise is over. You can hold me to that!

Beyond the Podium – Graham Sunderland

Those of you who followed my previous blog on Eclipse will know that this is the second time I’ve seen Graham on a cruise ship (I hope he doesn’t think I’m a stalker…) This time he gave a talk on Ocean Wanderers, which was basically a guide to the marine life that we might have a chance to see from the ship in the waters around Iceland.

It was a well delivered talk with lots of pictures; subtly dirty humour; and no technology malfunctions! Highly recommended.

Fitness Centre (Believe it or not…)

After a lazy afternoon of playing Carcassonne on the iPad, reading on the Kindle, and drowning in a sea of technology up in the Constellation Lounge (all while ignoring but enjoying the line dancing class that was going on in the background) I decided it was about time to get back on the fitness programme and have another go at some running. What better time to do some exercise than when cruising; we all know about the shrinking effect that the sea air can have on clothes, so I had better do something about it!

For those that don’t know, I’ve been trying to shift the pounds with a Couch to 5k programme. I had almost reached the end of week 2 when I hurt my knee, so I started week 2 again today in the Fitness Centre, which is part of the Spa on board Infinity, and situated right at the front of the ship with panoramic views out to sea. Unfortunately the treadmills, while facing the windows, are at such a height that you don’t get the majestic sea view that I was hoping for. Perhaps if I lost a couple of feet in height I’d have more luck. Nonetheless, I survived the ordeal and made it to dinner for our first formal night!

To our surprise our just retired Hong Kong world travelling table companions were suspiciously absent this evening; undoubtedly enjoying one of the many other dining venues on Infinity (or perhaps just hiding in their cabin while everyone else got dressed up). We also discovered that our table for 6 is really a table for 4 in disguise, so we dined alone tonight.

Food was wonderful, and our service very attentive. Our waiters, sommelier, and drinks waitress remembered us from last night and took an interest in how we’d enjoyed the day. This is the sort of interested and attentive service that is not expected, but adds so much value to the experience and doesn’t cost a penny!

Tonight’s fare included a beautiful filet steak (done as close to blue as I’ve had on a cruise) and a beautiful filo pastry basket with fruit for desert. Combined with plenty of wine, we were happy. For those who need their daily dose of salivation, here are some photos. Alex’s main course, Duck a l’orange, is also pictured. I tried a little bit and it was very well cooked and really delicious! I forgot to snap my starter (salmon rilette) and soup (strawberry with lime cream) because I was hungry, and the wine had already taken it’s toll on my memory. Either that or it was fatigue from the exercise I endured earlier (pick your excuse). 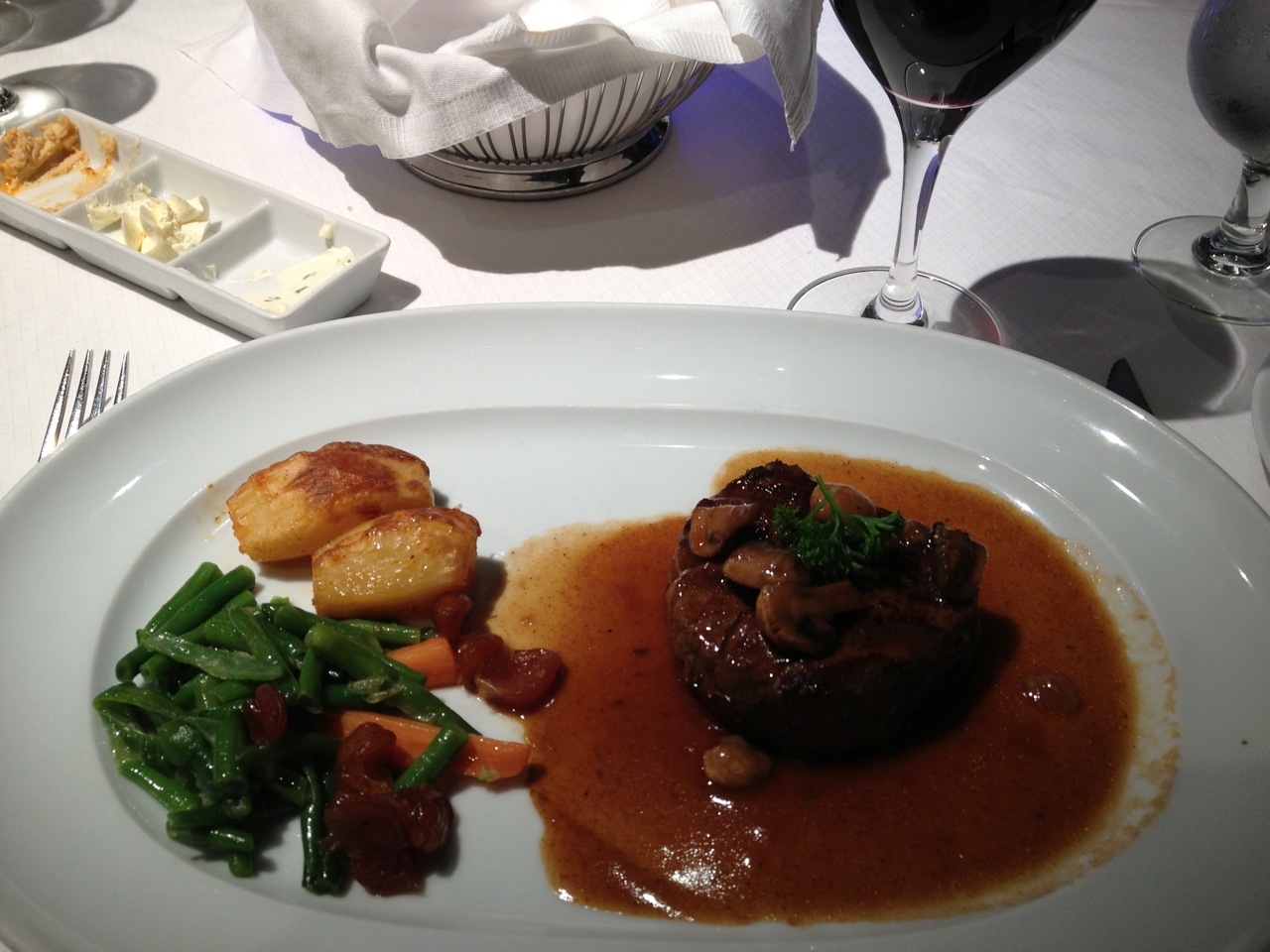 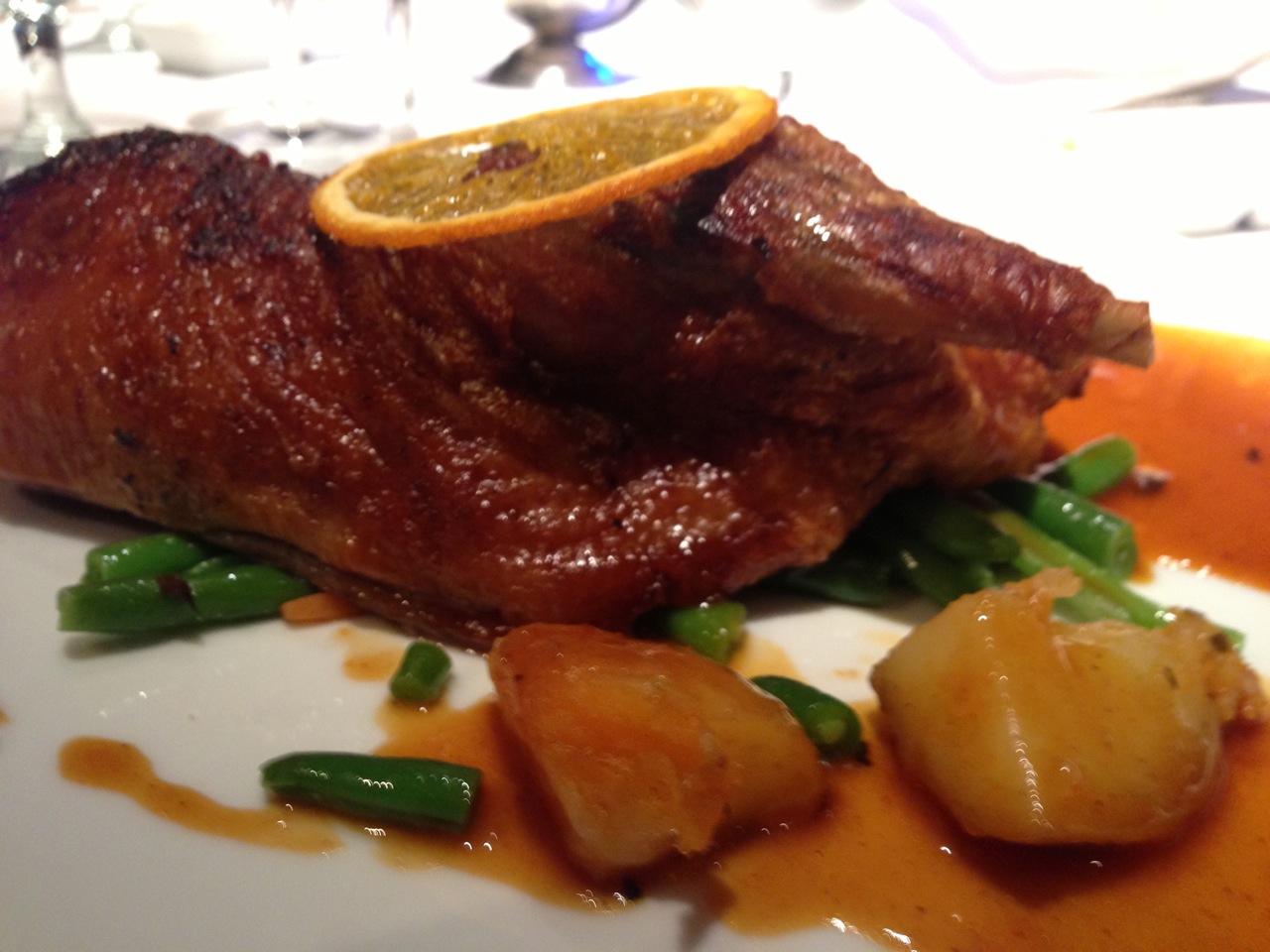 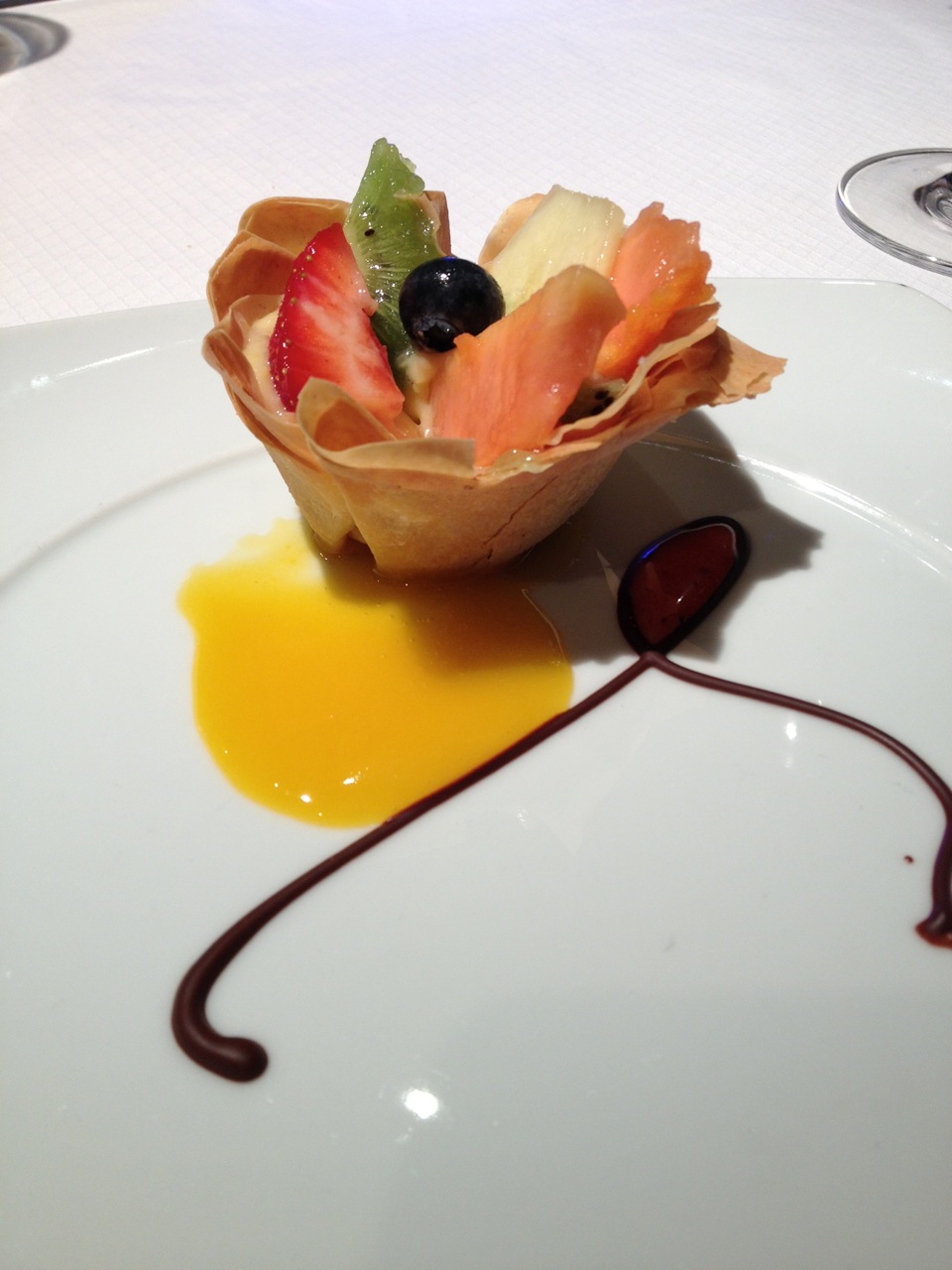 Before the show we were introduced to the ship’s master, Captain Michael Sympouras, and his senior officers. There was a toast to the voyage, then the show began. Well, tonight’s show was hot with a capital HOT! And by that, I mean that the Celebrity Theatre was like an oven and I felt like a Sunday roast. Nonetheless, the show was quite good fun, with a compilation of music and dance from around the world. There’s no doubt that these guys are talented and have some fantastic direction. It wasn’t as good as last night’s show, but I’m certainly not disappointed.

After such a busy day at sea, we’re absolutely knackered so it’s off to bed for us. Tomorrow we’re docking in Tórshavn in the Faroe Islands. We don’t have much of a plan yet, so stay tuned to see how we get on!

If you haven’t already done so, click the ‘Follow’ button at the bottom of my blog and you’ll get an e-mail every time I post a new entry.