I had a nice relaxing final day, despite feeling a little rough in the morning. I enjoyed some quizzes, had a very kind gesture from my companions, and we all said our sad farewells.

After having quite a very enjoyable late night in the champagne bar, I didn’t feel quite my usual chipper self this morning. Worth it for the VC demi-sec available by the glass! I chilled out for most of the morning with only a brief trip to the Corinthia Lounge for a bite to eat.

Still feeling rough, I met up with our wonderful forum group for the quiz in the Golden Lion pub. The first was done on the new computer system again and was much, much more successful. I also managed to actually contribute to the winning team with my knowledge of the characters in the hit musical Avenue Q! It was not a question that many others in the room knew for some reason.

The second one was a movie quiz where cryptic clues were provided. I was terrible at these but managed to get one of them. Overall I wasn’t a huge contributor to the quizzes, but as a team we were pretty competent. Everyone has a different knowledge base and makes their own little contribution. It’s great fun as a team!

Shortly after the quizzes the band came into the pub and played another Dixieland set with lunch. They’re so good that it was a pleasure to listen to them again. I chose the fish and chips again. They were delicious the first time, but in the name of science I felt I had to ensure a consistent product by having them again. This is important research! I can confirm that the standard has been upheld. 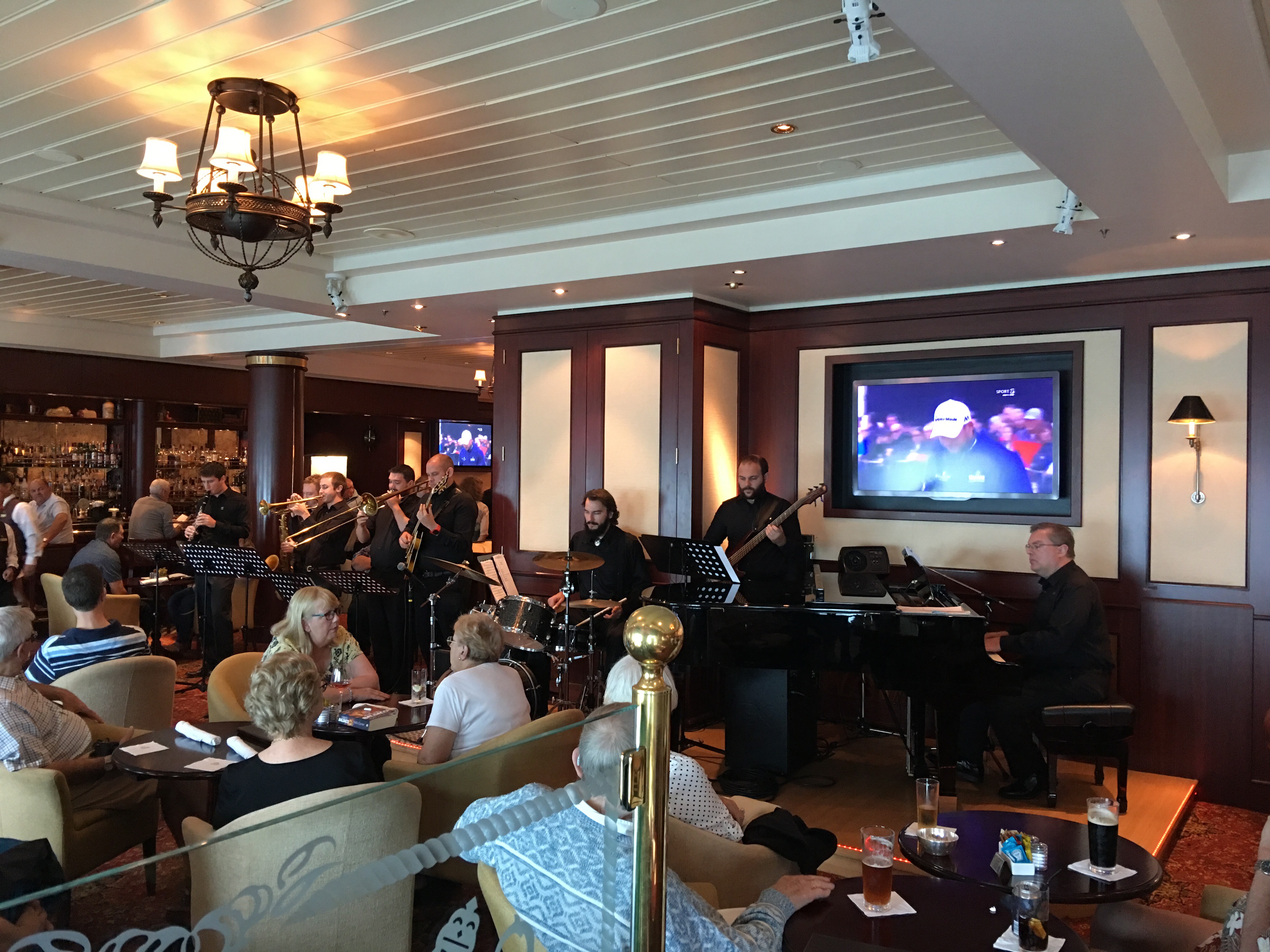 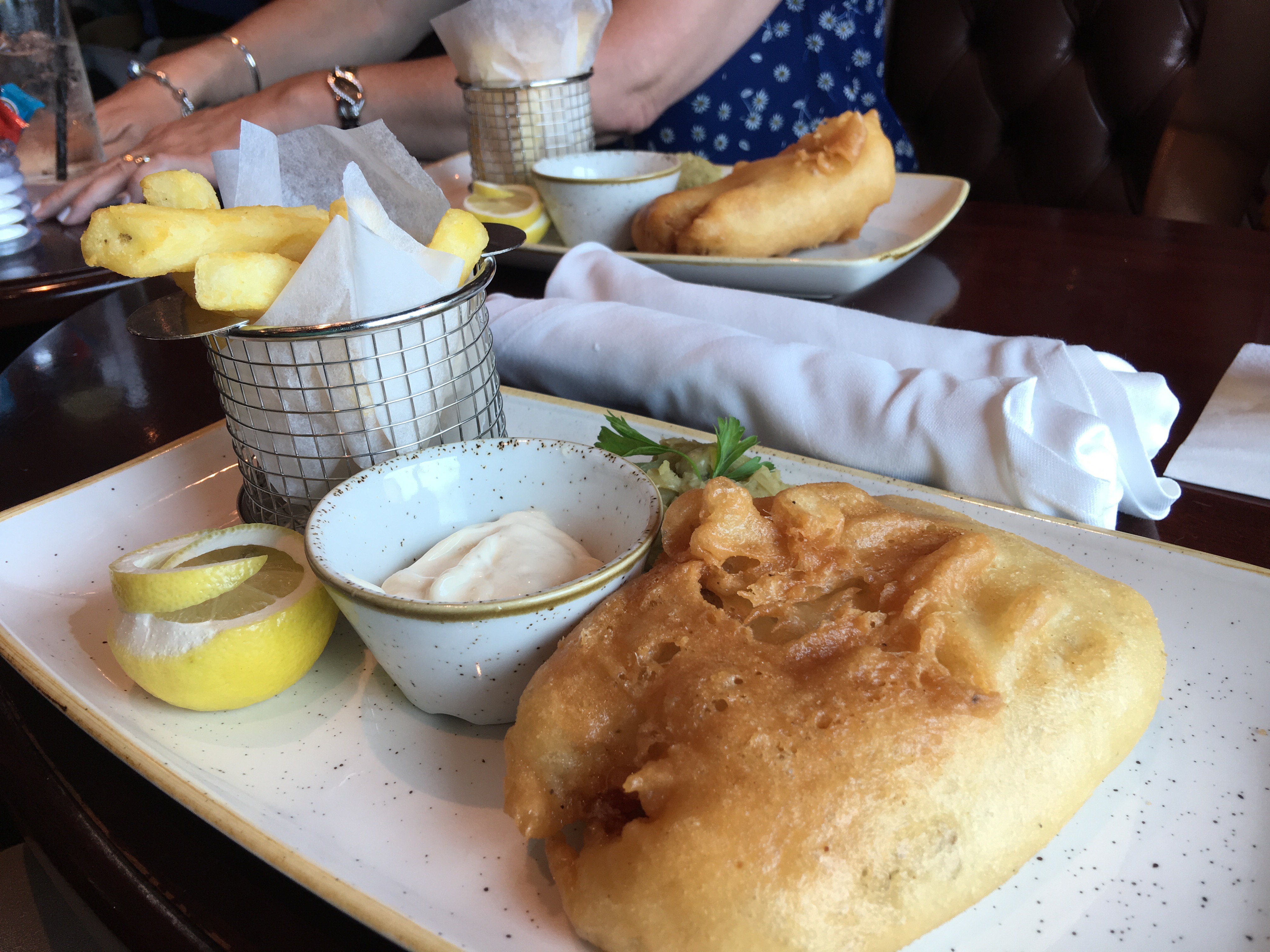 The planetarium was next on my hit list, with a show about collisions in space which explained how collisions have helped form our universe and are responsible for our seasons and tides! It was much more space focussed than last time, and I really enjoyed it! The planetarium is really quite special, and to have it at sea is just fabulous.

I have previously mentioned that RADA were on board tellling bedtime stories. Well in the afternoon they put on a one hour long production of Pride and Prejudice. I’m not familiar with the story, but the dramatisation was good fun. Unfortunately I was dozing off as the beer and pub lunch were taking their toll! 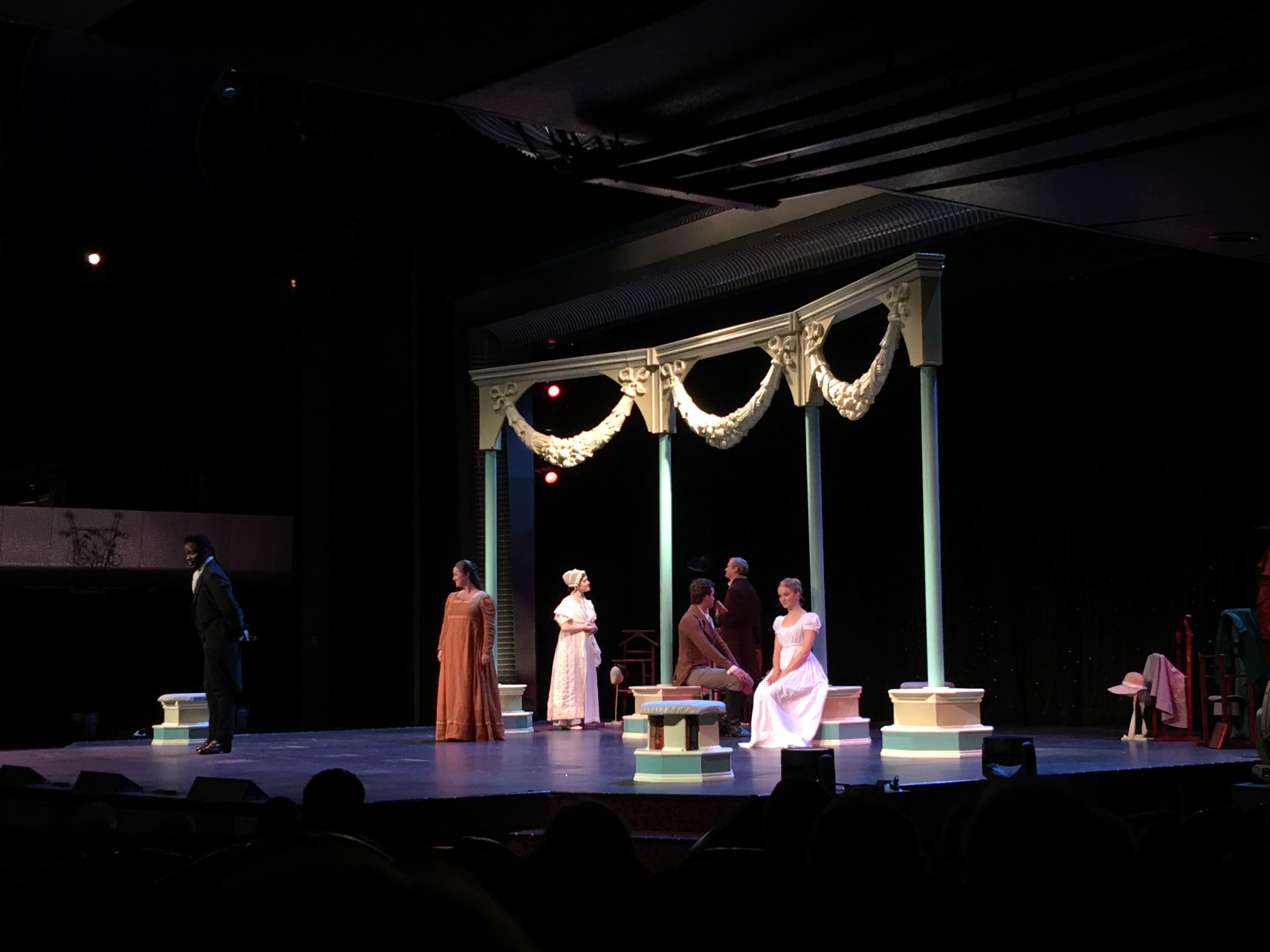 Many of our group have been competing to win prize stamps, as I mentioned in a previous post.  We’ve got a very successful Bridge duo featuring Mrs M and partner, a great quiz team (which everyone has contributed to), and some stunning darts performances from Carol (WGC) & husband.  Very kindly, they donated all of the prize stamps to me as a birthday present!  With a total of 15 stamps, I headed to the stamp reception room at the allocated time to choose a prize. 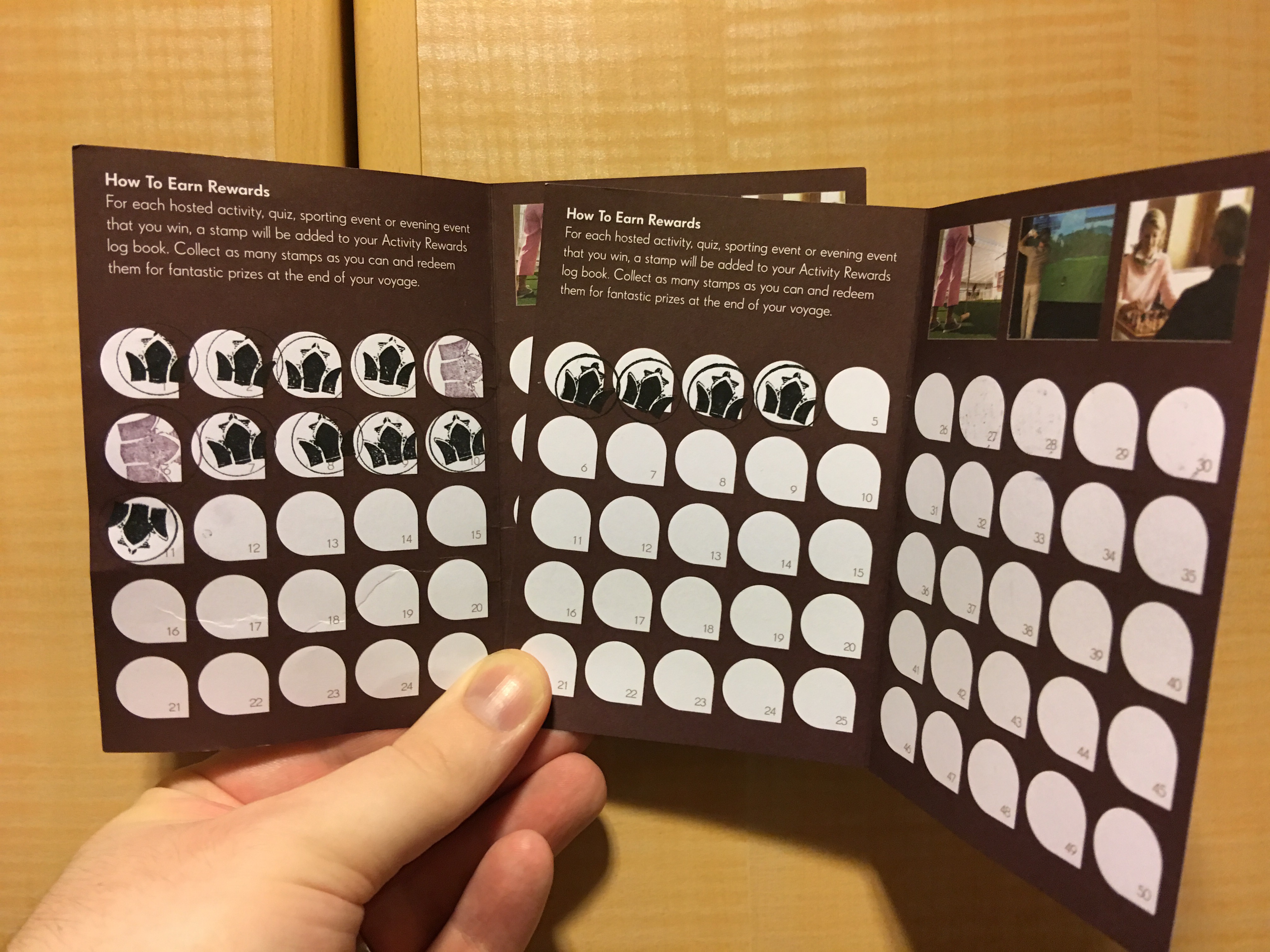 There are quite a lot of prizes on offer, but I chose a silver photo frame (12 stamps), a pen & keyring set (2 stamps), and a pencil (1 stamp).  I’m very pleased with this, and will have a lovely portrait photo of our entire group at dinner to put in it.  Pooling the prize stamps has always been done and a few of the group already have the silver photo frame, so it seemed appropriate and will serve as a great memento of a fabulous cruise. 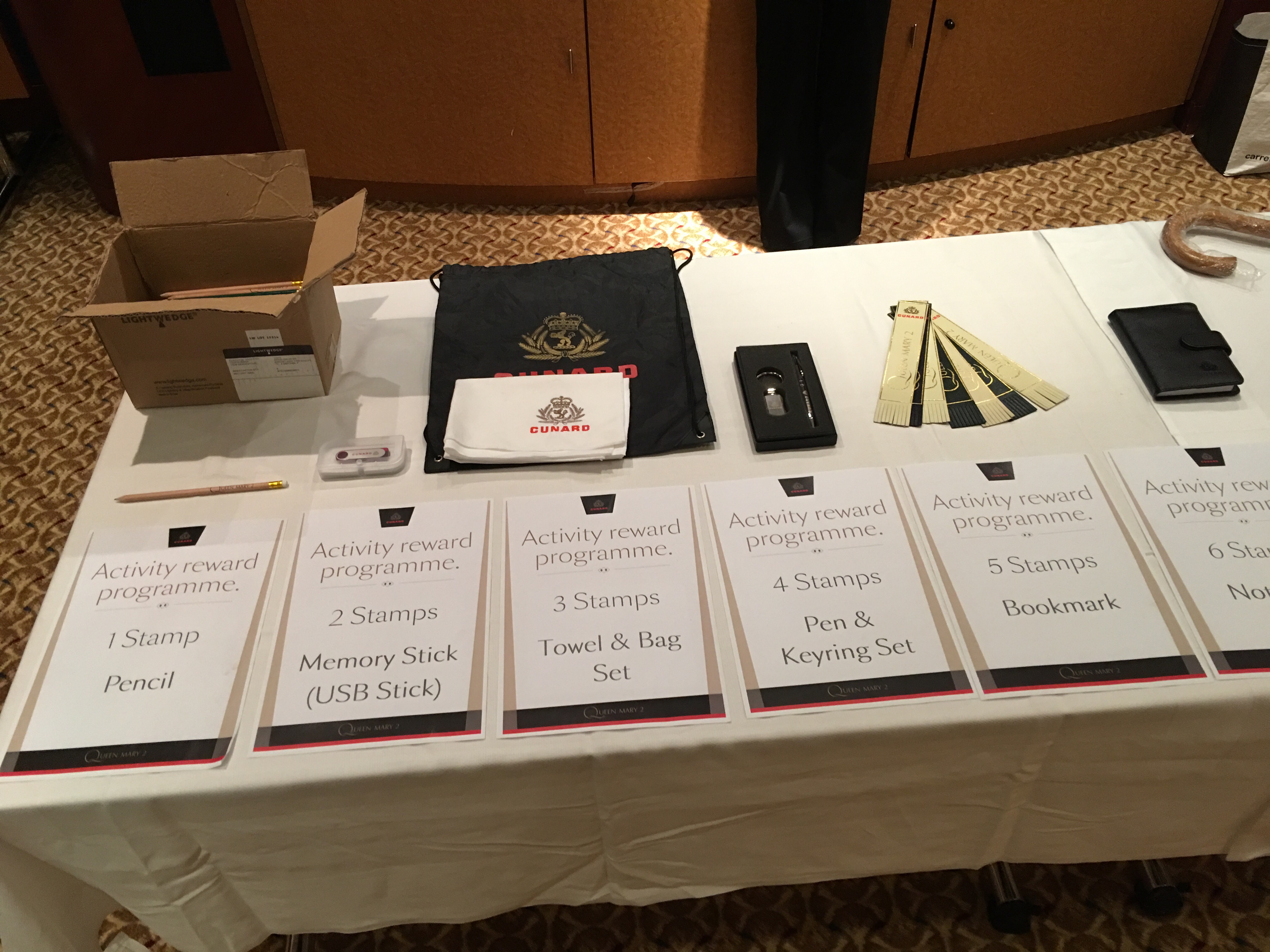 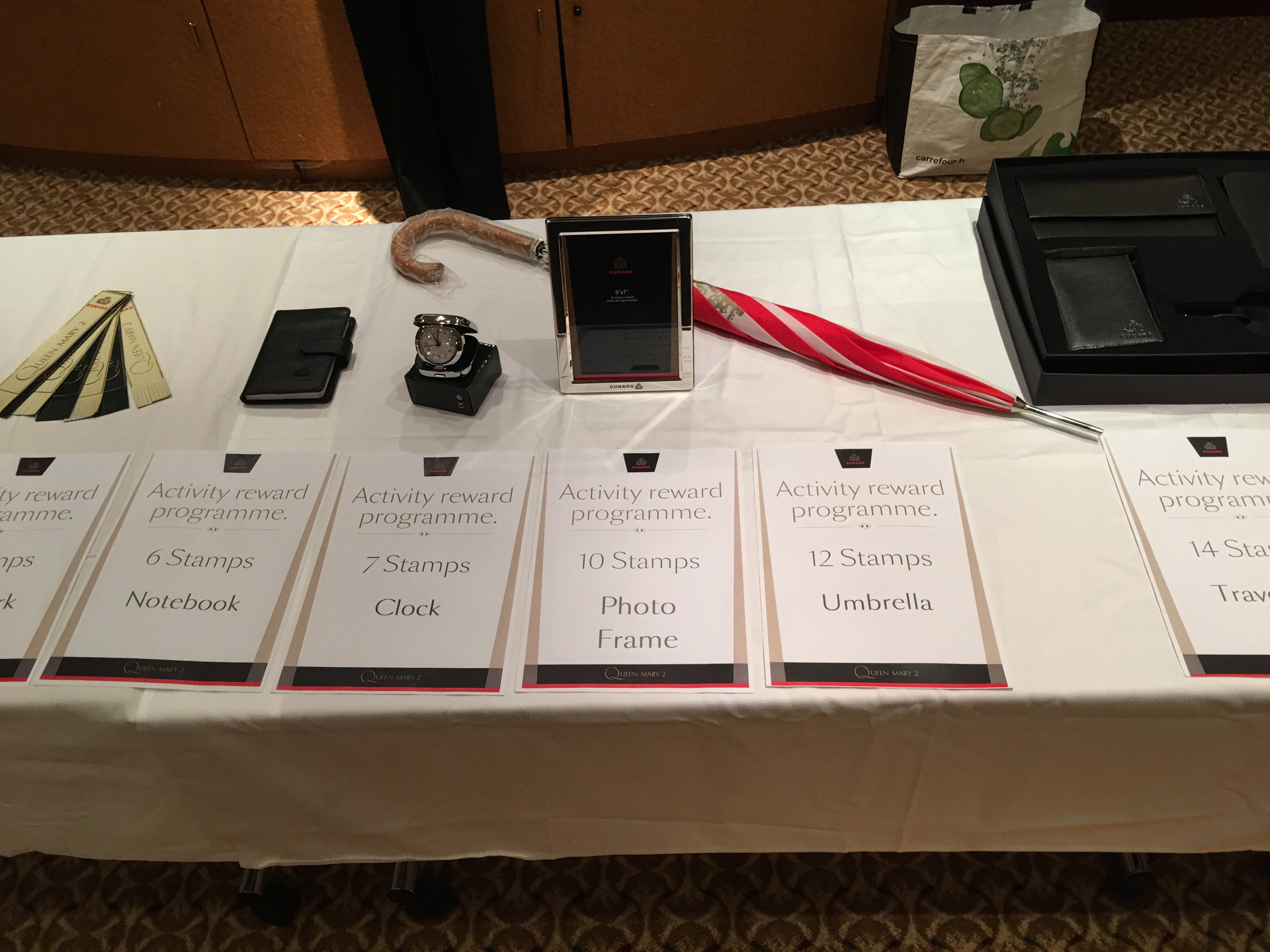 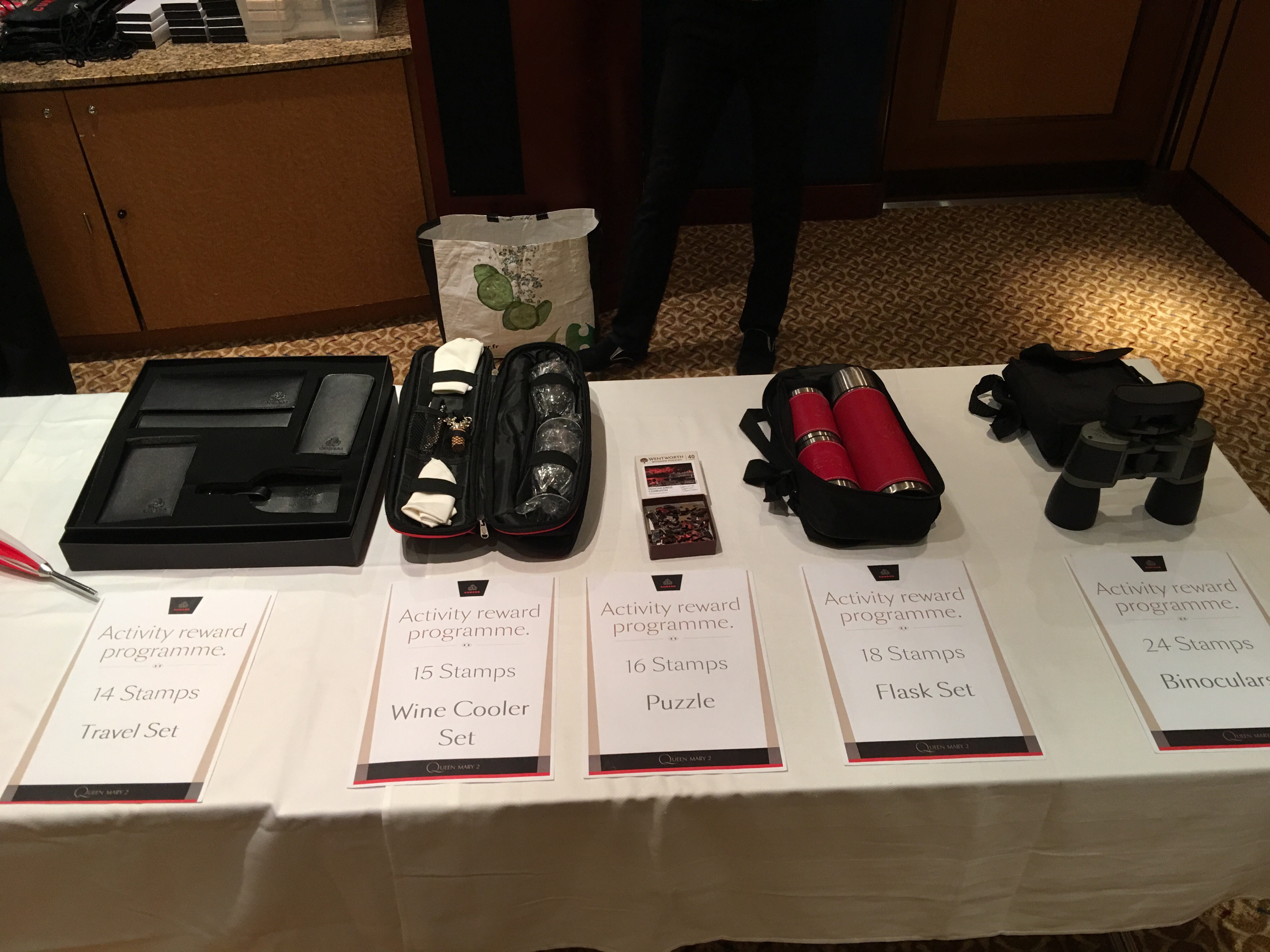 Tonight was another trip to the Commodore Club, with a final lovely chat with the couple I’ve met every night there. Tonights drink was “All Consuming Passion”, inspired by Commodore Ivan Thompson.  Delicious and colourful! 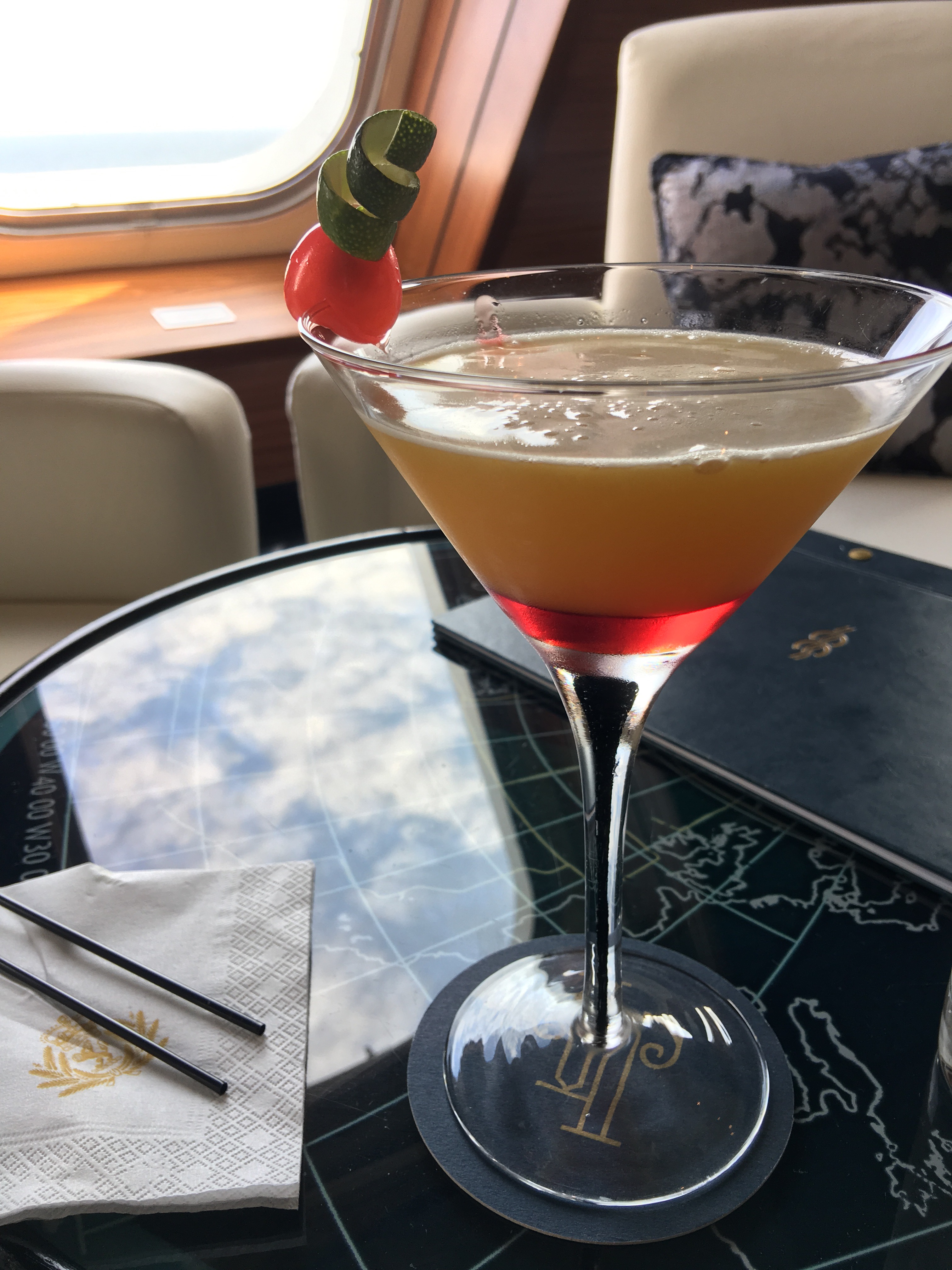 Our final dinner tonight was another wonderful occasion, though there were definitely some menu mis-interpretation!  I had a delicious pulled chicken croquette, followed by what sounded like a delicious breaded chicken breast.  What I mis-read was that the chicken was stuffed with blue cheese, which is pretty much the only food that really makes me gag!  Desert was a pear tart which was delicious, but which I forgot to photograph. 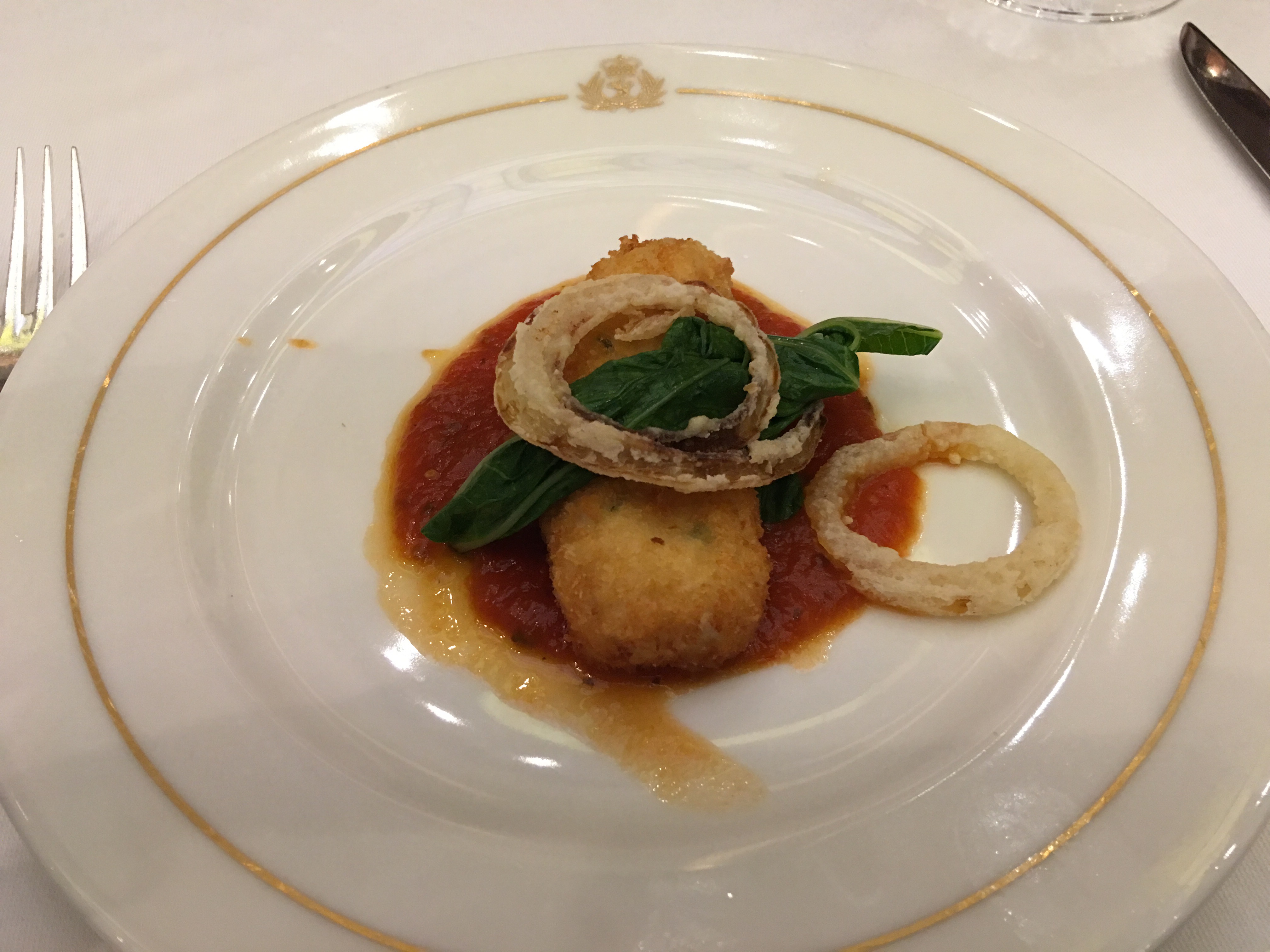 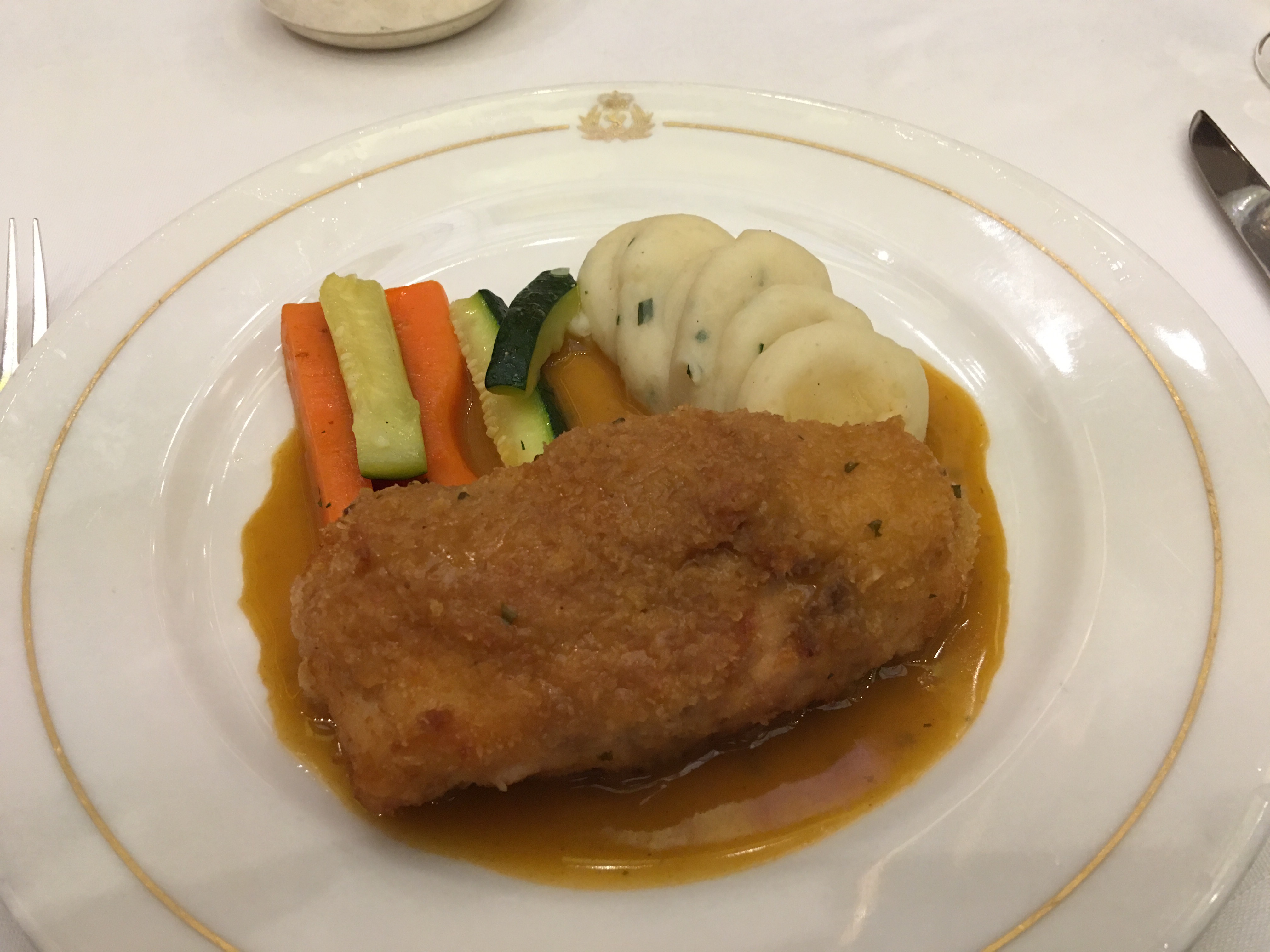 After dinner, we retired for some farewell drinks in the champagne bar, where I had one last glass of VC before finally heading to the stateroom to pack.

In the morning I set the alarm for 6am, with the intention of leaving at around 7:15am as I had a long drive the following day and wanted to set off early.  I managed to have some breakfast in the King’s Court which wasn’t too crowded, and managed to catch Queen Mary 2’s arrival into Southampton.

For some reason the UK Border Patrol had decided to passport check everyone leaving the ship, and did this on the ship itself.  They set up a makeshift border checkpoint between the lifts on Deck 3 and I was off fairly quickly.

Farewell Queen Mary 2.  I enjoyed this trip more than I could have expected, and found Queen Mary 2 to be stunning following the remastering.  I will definitely be looking to book on her again, hopefully for a Transatlantic.  Watch this space!