Today we had a busy day in Athens and enjoyed another visit to the Chops Grille for dinner. Evening entertainment was a bit different tonight, and we even got involved!

We didn’t dock until noon into Piraeus, which is the port for Athens and about 30 minutes by bus away. We took the opportunity to have a lie in and have some breakfast in the buffet restaurants again. This visit was more what I expected from a buffet – chaos! It wasn’t too bad, but much busier and it took quite a while to get a table. Once again, the food was of reasonable quality and the service was good, with people there to get drinks (I like the freshly squeezed OJ which makes use of my drinks package).

I started to get a bit concerned that Athens (particularly the Acropolis) would be horrendously busy and we would have been better to get a Royal Caribbean excursion. I spoke to the desk who had the one we wanted left, but when I went back to book it there was only one space left, so we were forced to ‘do’ Athens on our own.

We had pre-booked a City-Sightseeing bus for this port. There are 2 tickets available: one for just Athens, the other for Athens & Piraeus allowing access to both busses. Naturally cruise passengers want the dual ticket as this includes transport into Athens! The City Sightseeing busses were just through the car park outside the port and left promptly after we arrived. The Piraeus City Sightseeing bus runs regularly from the Cruise Terminal to the Acropolis, where you can change onto the red route.

When we got to the Acropolis we were very pleasantly surprised as to how quiet it was! We had definitely arrived before the cruise ship tours, only had to queue for a few minutes to get an entrance ticket, and walked straight into the Acropolis site. The ticket office at the Acropolis only accepts cash, so be prepared for that as the miserable desk staff aren’t much help. As much as I favour Credit Cards for my foreign spend, I always withdraw some cash while aboard to cover these eventualities. Tickets are €12 for adults. There is a frozen lemonade stand outside the ticket office selling delicious lemonade for a somewhat extortionate €4.50 per cup. It’s delicious, but you better prepare for brain freeze when you get to the entrance and discover that no beverages are allowed to be consumed inside – not even water! We saw several people who had water in their bags told off for taking a drink while inside the site.

Speaking of rules, there is a big marble tablet as you enter the side with a list of rules – some of them are obvious, while others are more entertaining. I have no doubt from my experience that visitors are watched like hawks while visiting the site. The ruins in the Acropolis (including the Parthenon) themselves are breathtaking to behold and well worth a visit. A guide will naturally let you know in more detail what you’re looking at, but there are lots of signs explaining everything, and a bit of time on Wikipedia will offer plenty of enlightenment as to the history of the site. I much prefer walking around on my own because you can take time to look at the things that interest you, and skim past the bits that you’re less bothered about. The view from the top is stunning, and you start to get a sense of the scale of the city. It was very interesting to read about the restoration work that’s ongoing on the site. In fact before I visited I hadn’t considered that the Acropolis is an active archaeological/restoration site and there is evidence of this everywhere, with cranes and scaffolding occluding every photo! 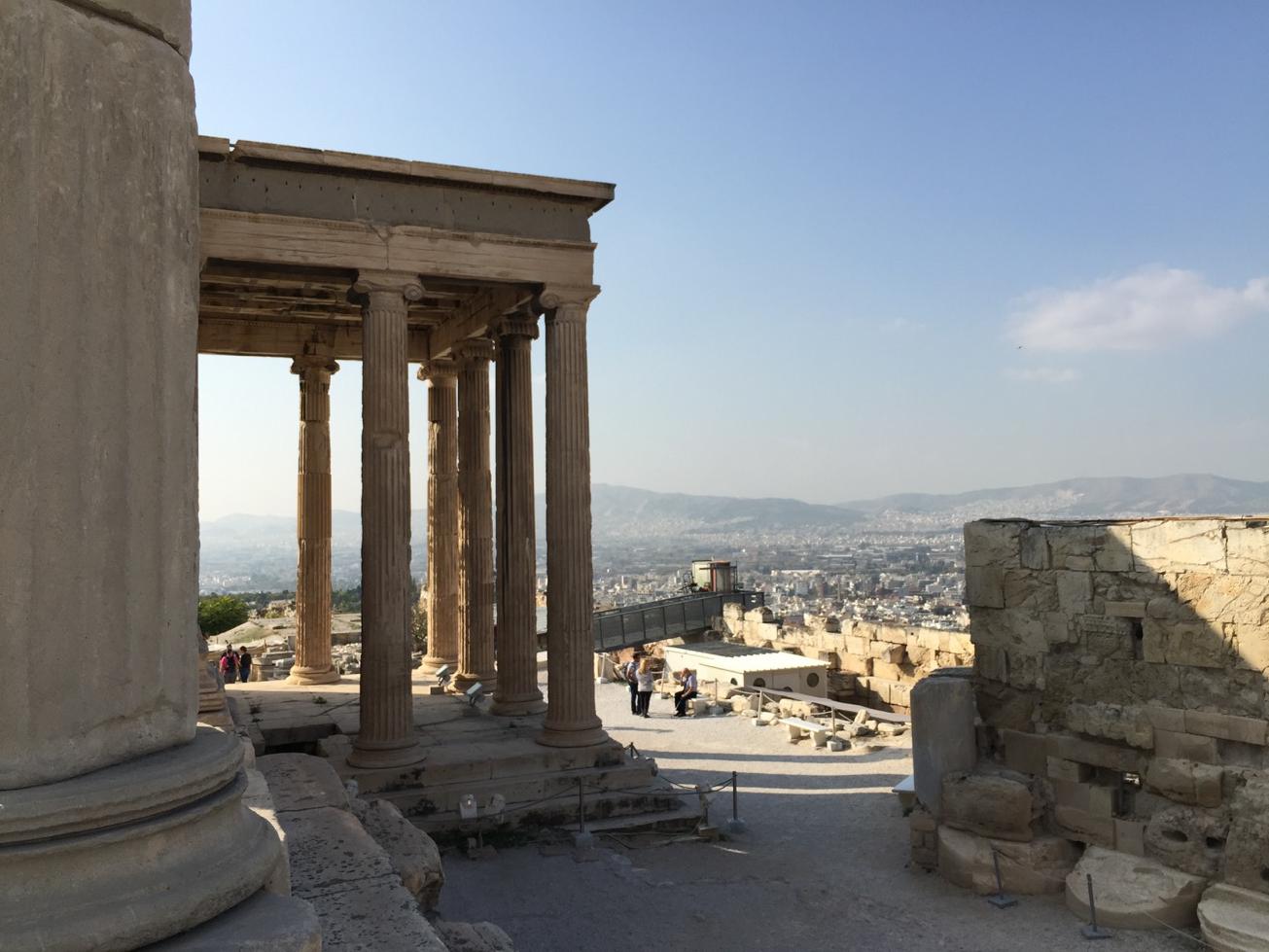 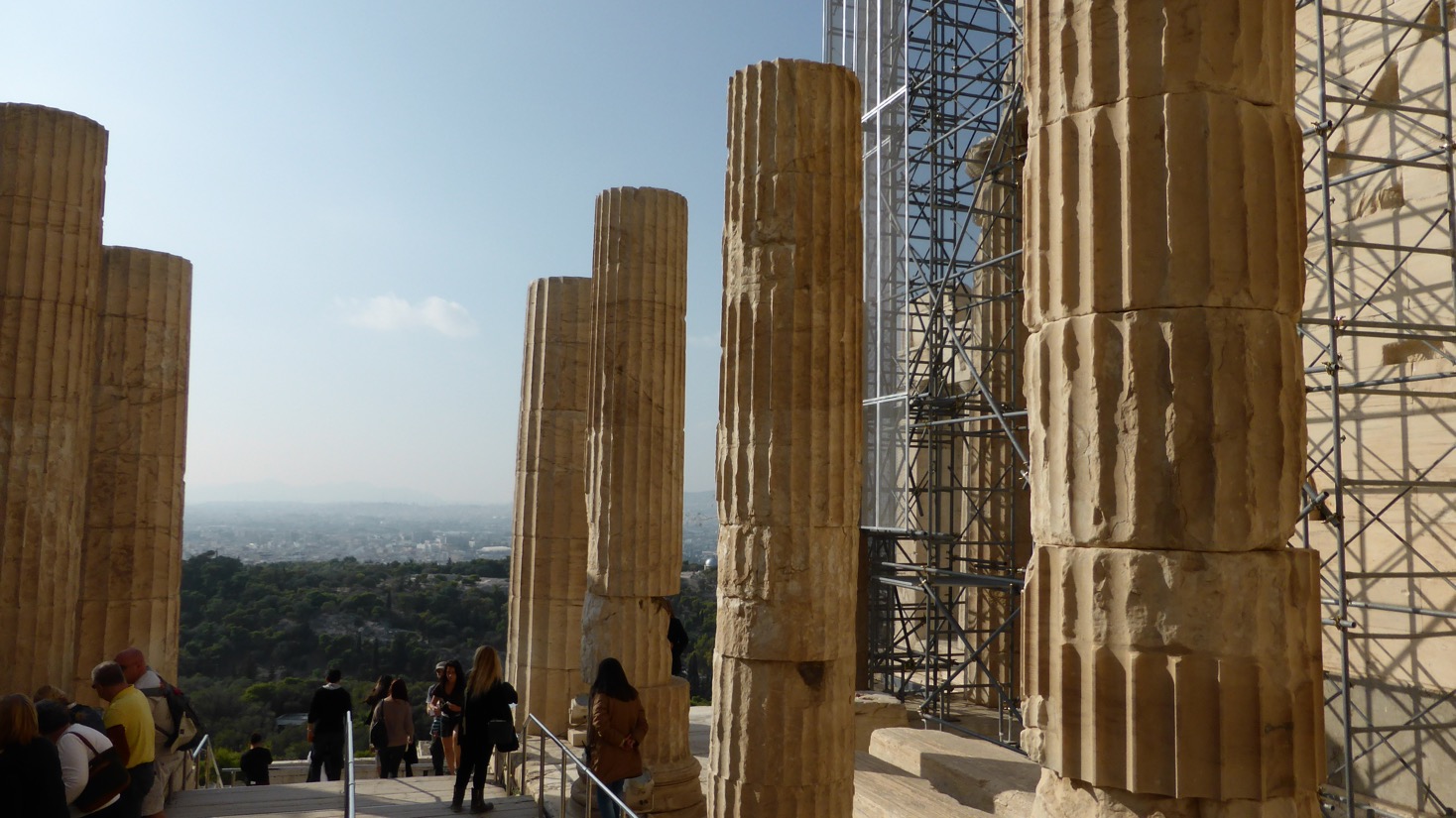 Some of the restoration that’s being done seems to be re-doing the inferior work that was done in the very early 20th century which they seem to indicate did more harm than good in some cases. I can’t help but wonder if we’ll be having the same conversation in another 100 years! The current work around the Parthenon seems to involve dismantling the columns, repairing or replacing the damage, filling cracks with a special resin, and stacking them back up again. Some of the decorative stone work has been completely reproduced and it led Lesley and I to have a philosophical discussion on aesthetics and where the value lies in these ancient architectural wonders; how much of the building needs to be replicated for it to lose it’s value as an attraction? From the Acropolis we walked down to a market where Lesley bought a few little souvenirs and had a look round various little shops and streets before jumping on the Athens route City Sightseeing bus for the full circuit tour around Athens itself.

As is normally the case with these excellent value busses, the commentary was very informative and you could see a lot from the route, which is nice when you have such a limited time in a port. The majority of our day was spend exploring the Acropolis!

The trouble with the bus in Athens is that the traffic is so bad that the tour isn’t as condensed as you might like, and the full route took close to 2 hours. Still, it was an informative route and when we got back to the Acropolis we jumped back on the Piraeus route back to the cruise ship. 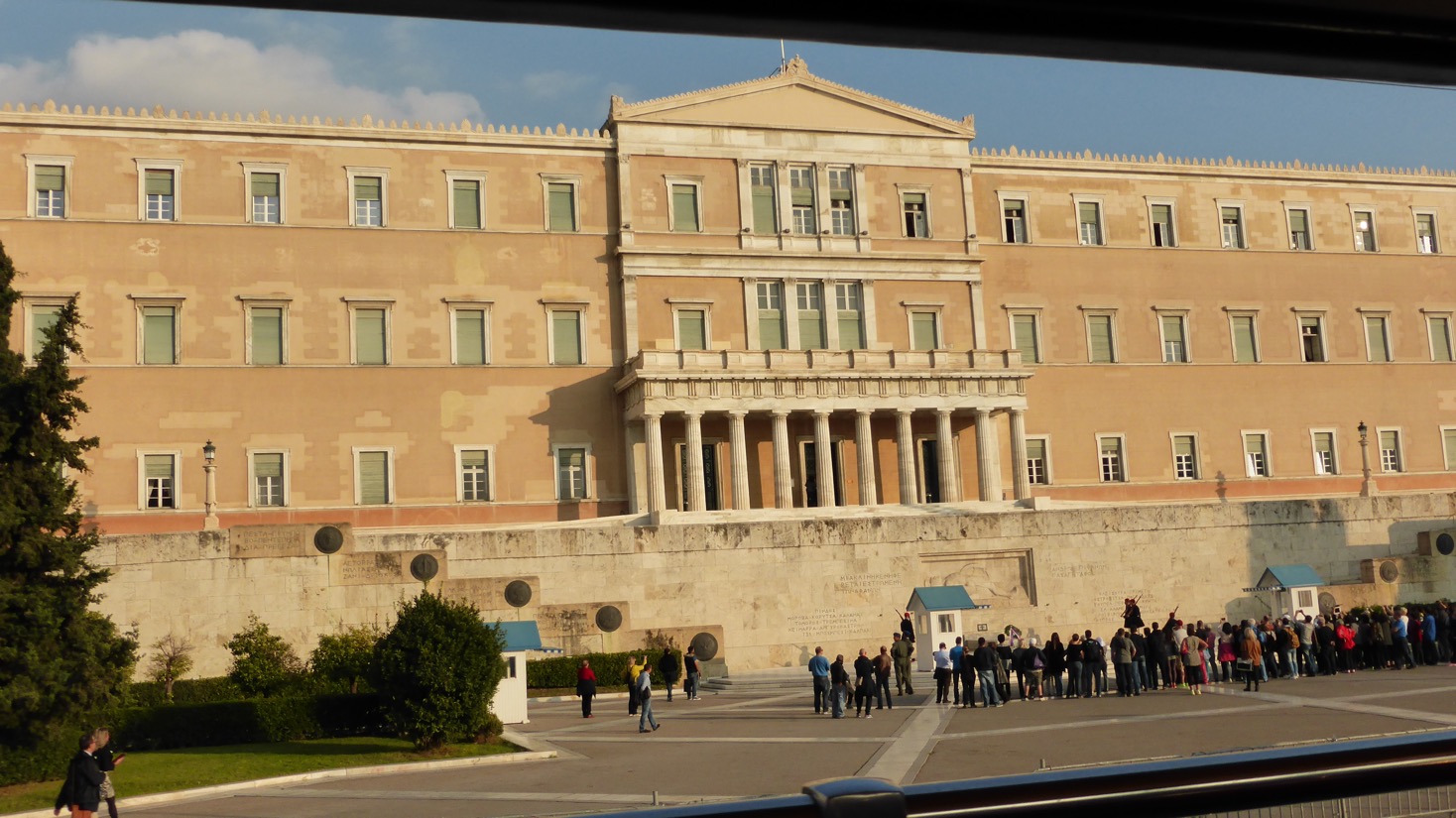 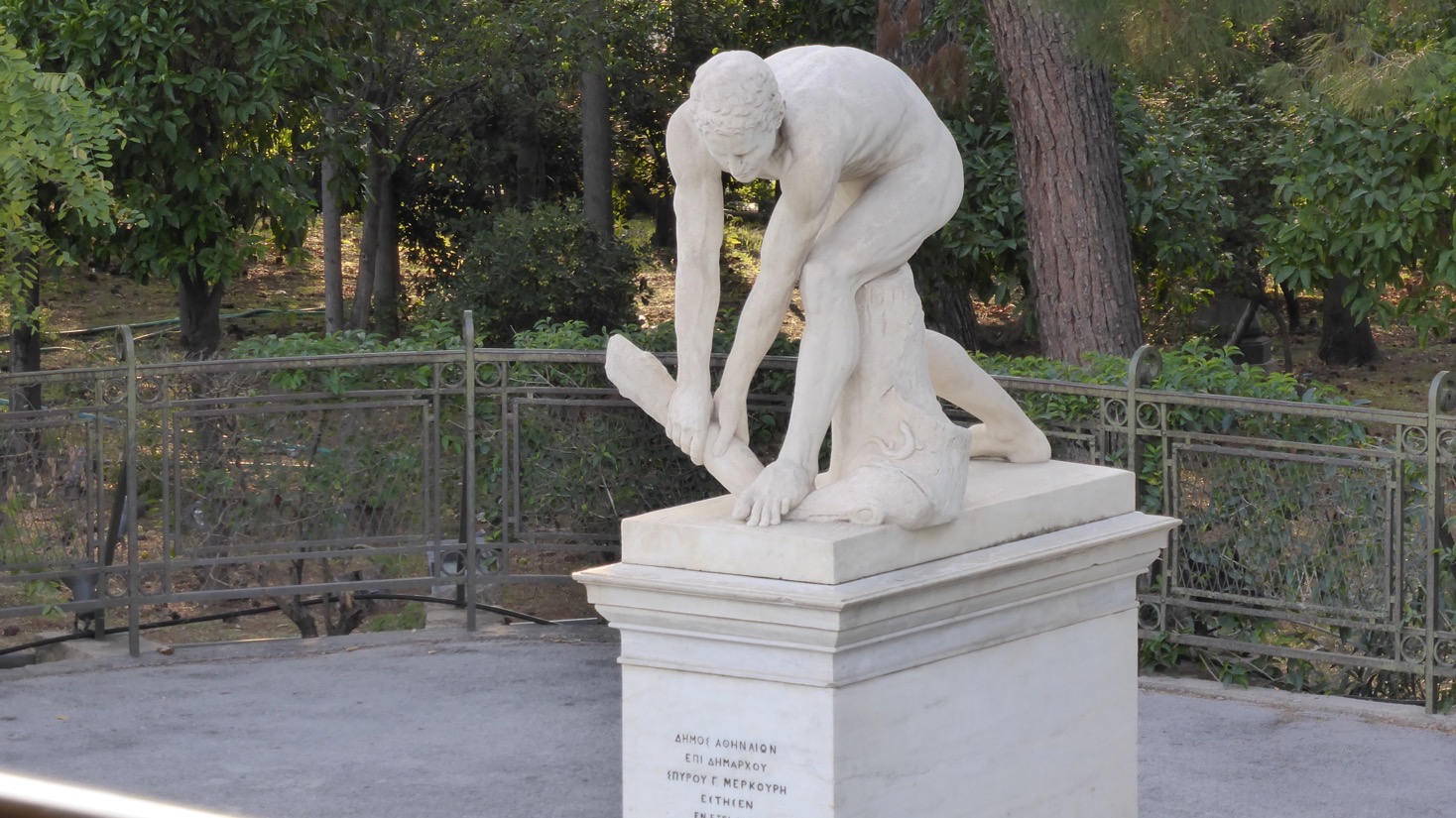 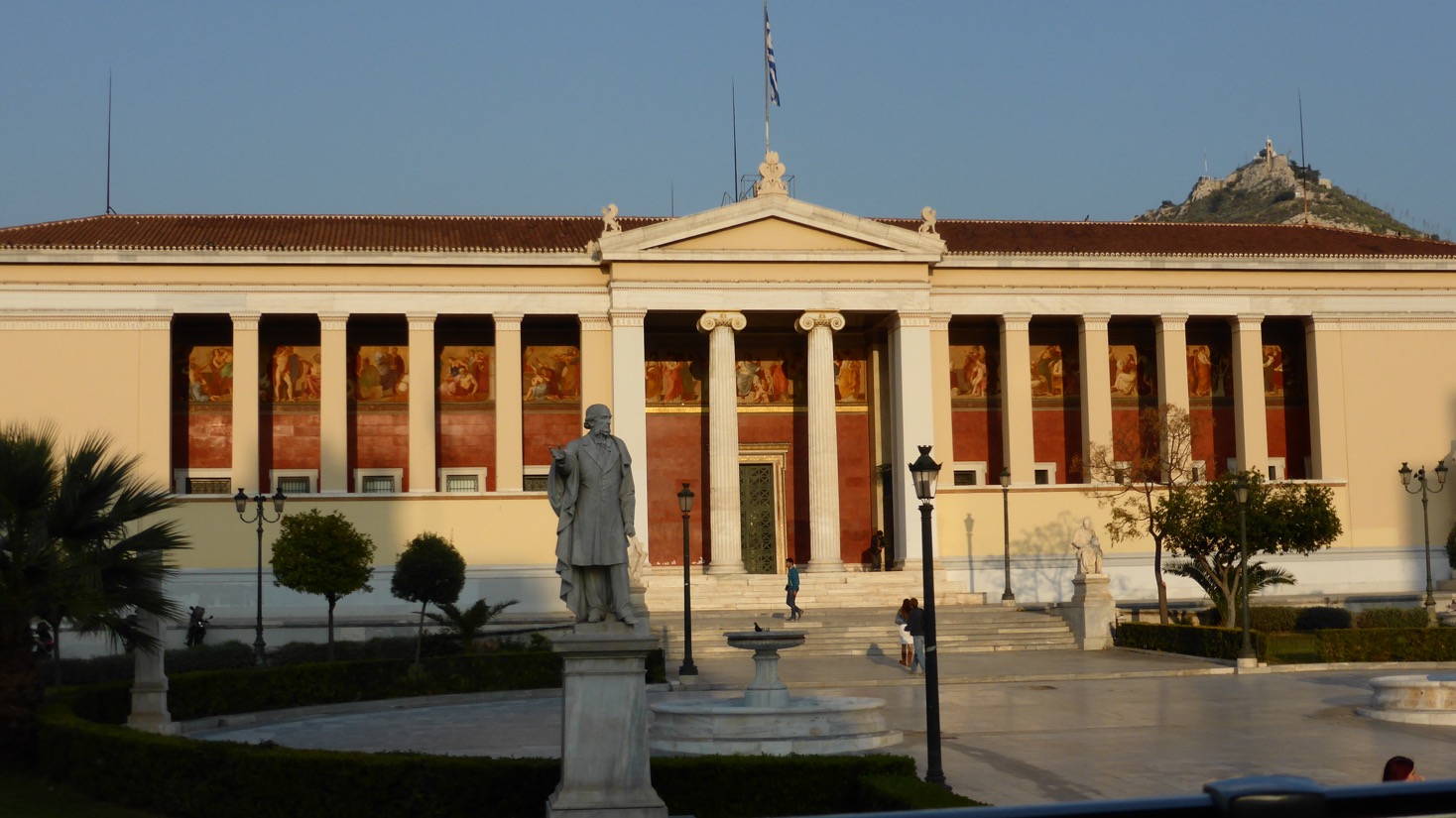 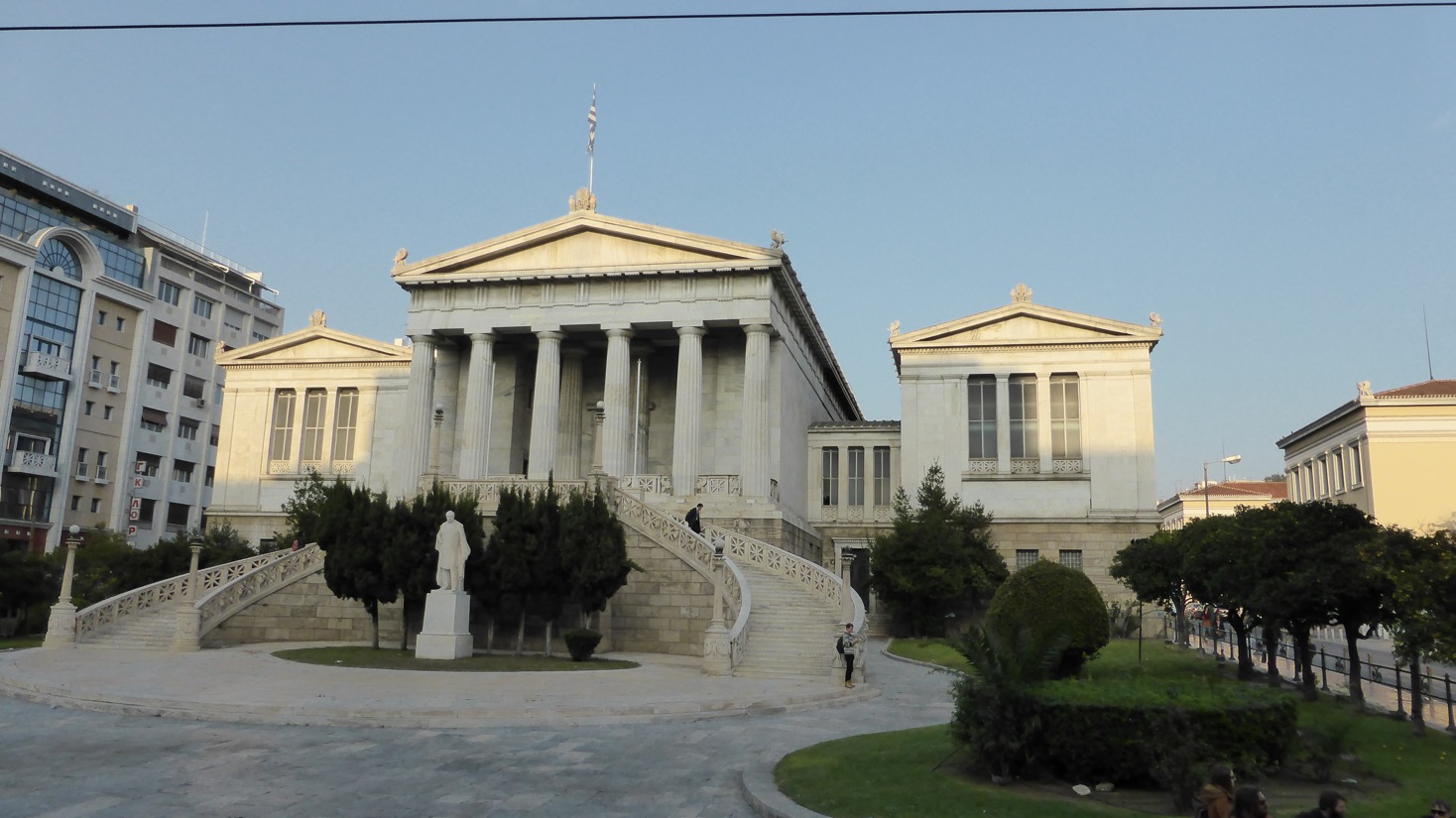 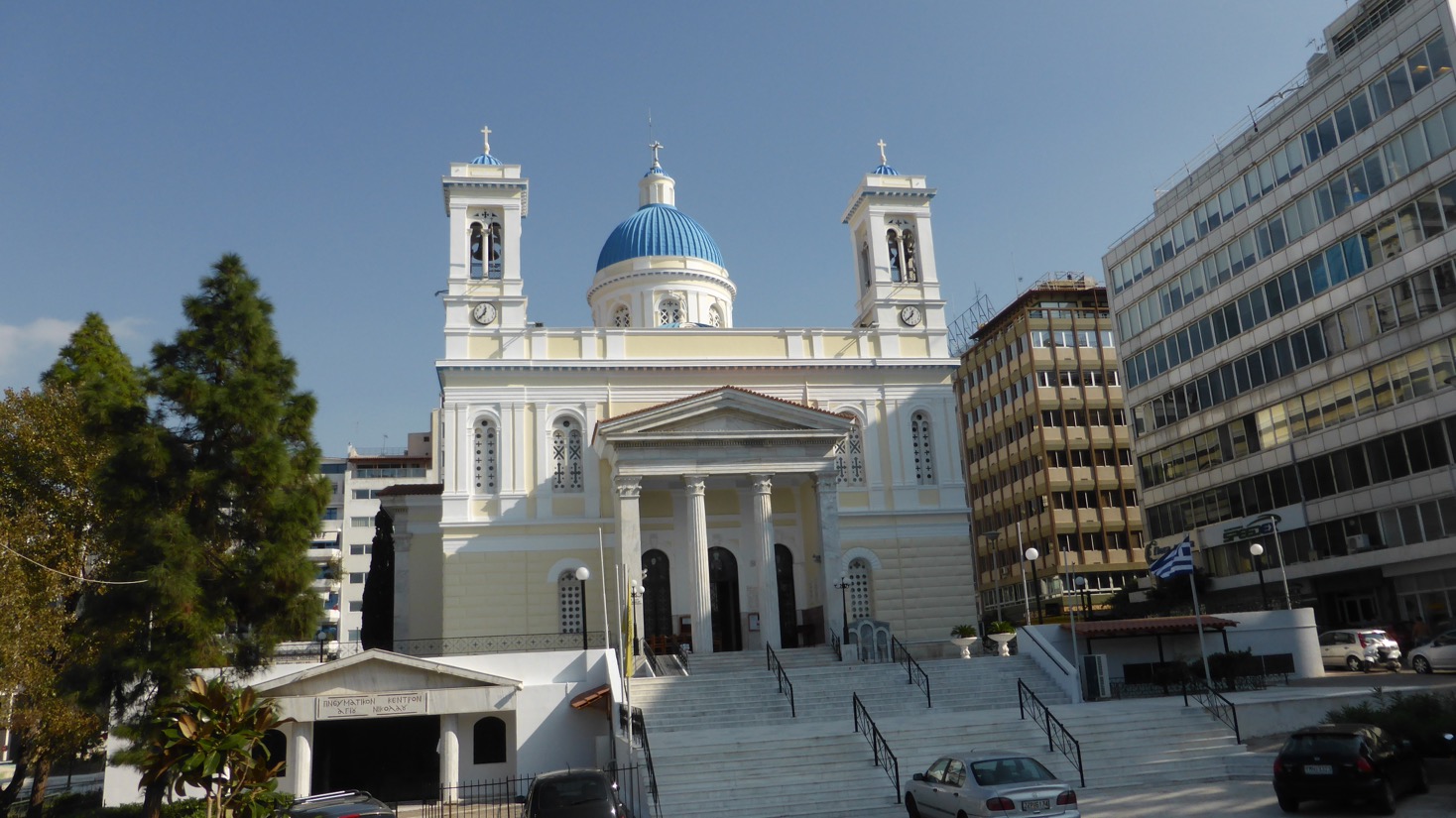 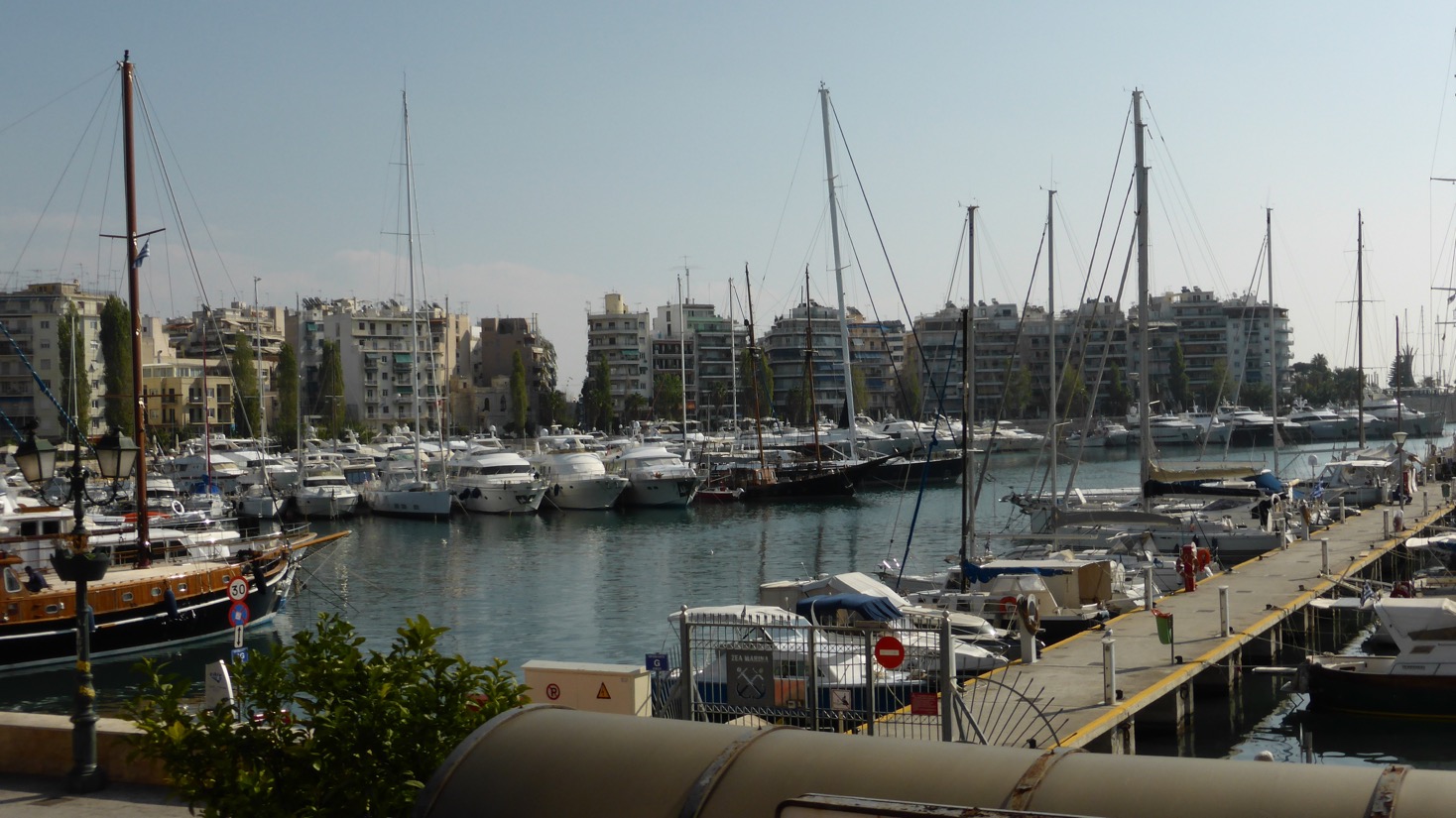 The weather was very warm in Athens during the day in the sun, but as the sun was setting the open top of the sightseeing bus got very chilly and I desperately wished I had a jumper! I wore jeans and a short sleeved shirt and was almost uncomfortably warm during the day and in the sun.

As we hadn’t had anything to eat since breakfast, we went straight to the Chops Grille again for dinner, where we were seated sight away without a reservation.

When we arrived, we were acknowledged as having been there before and the host that seated us ensured we were served by the same waitress who helped us before. This was nice to see, and she remembered us, making a few comments linking back to our previous visit. This sort of service is excellent!

The food again was good. Lesley especially liked the bread that’s offered when you’re seated and comes with a mustard butter. Tonight I had shrimp and crab cake, roast chicken, and a mud pie cake for dessert 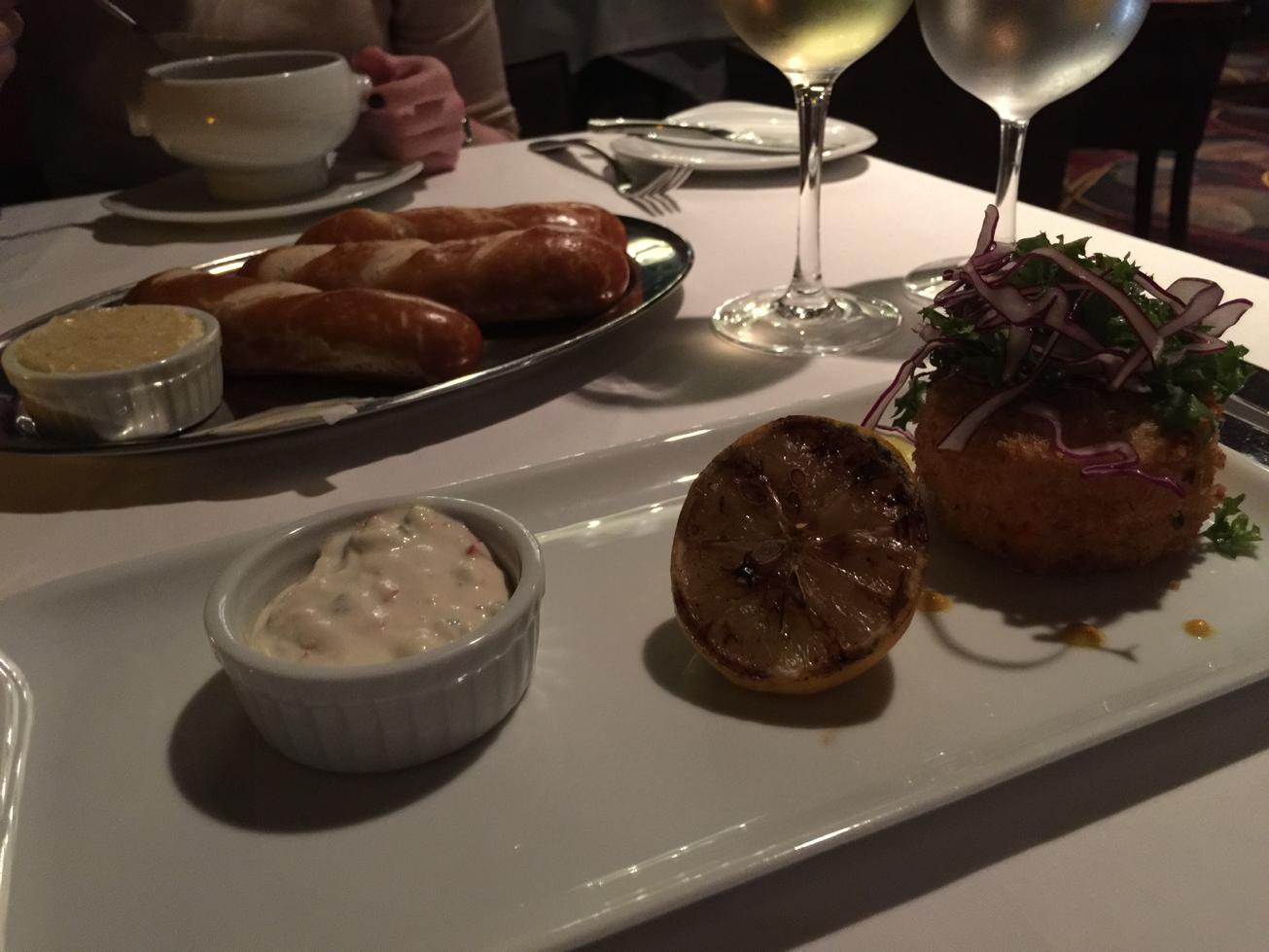 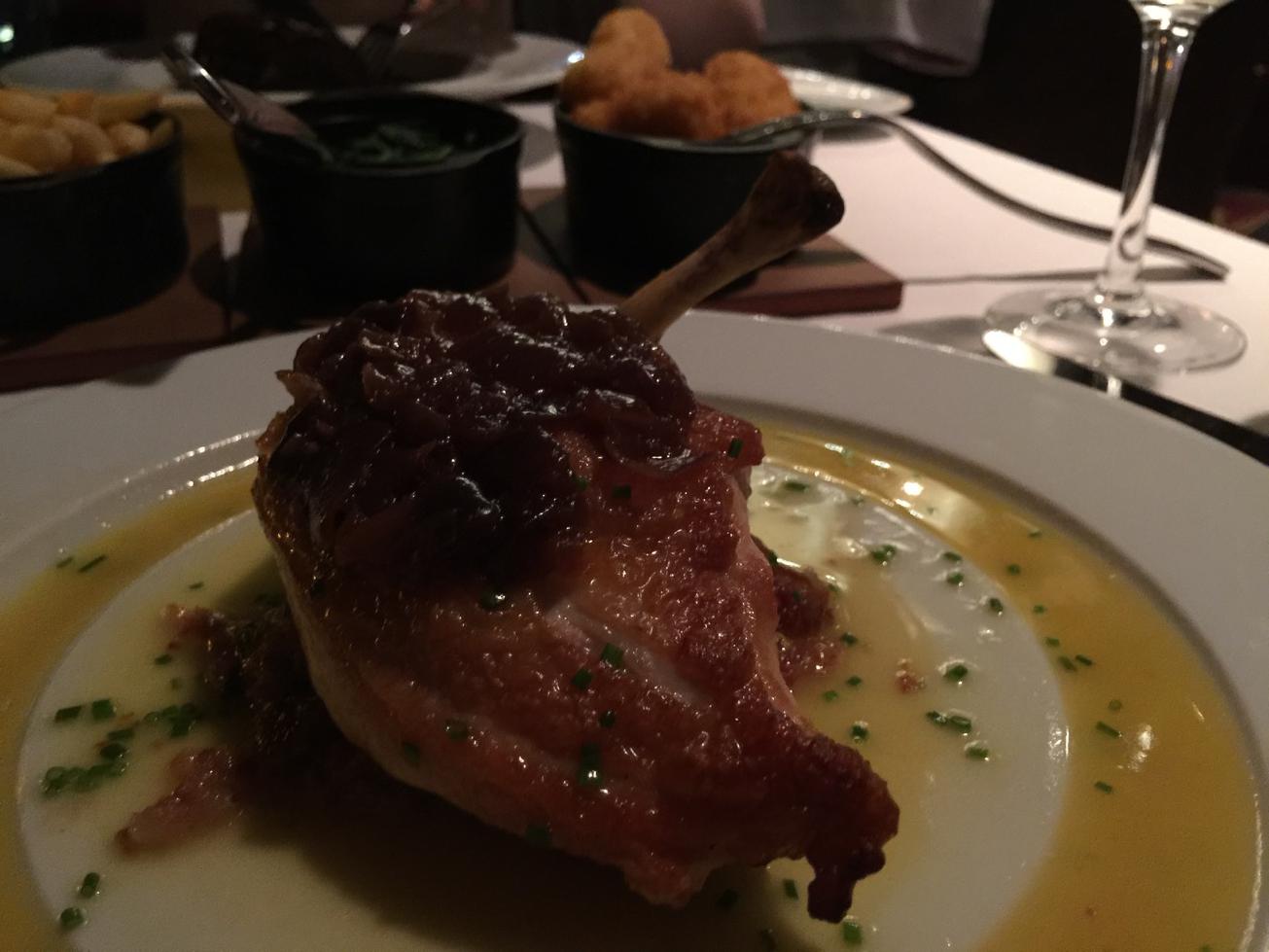 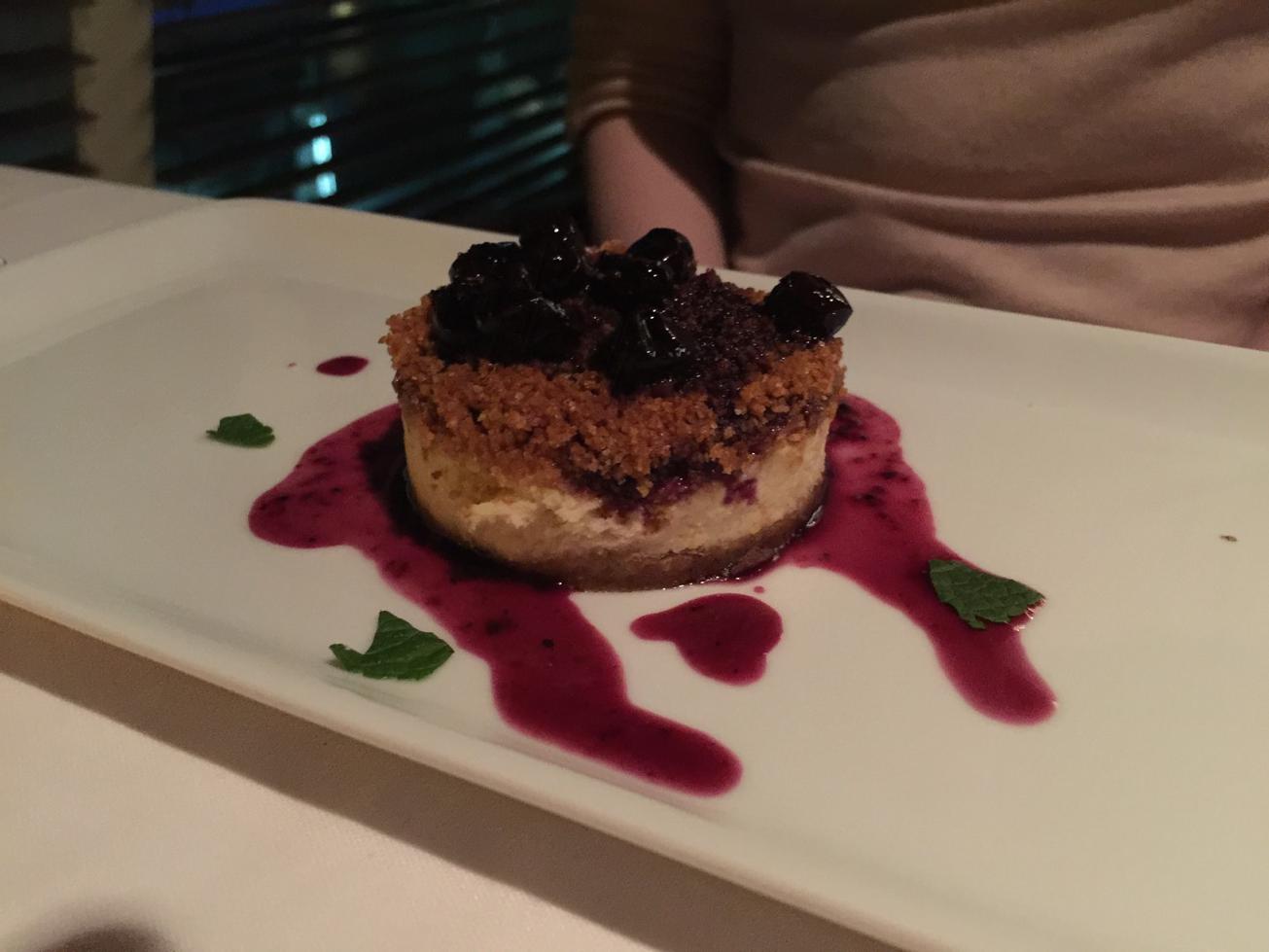 Tonights entertainment was a little different. The main show for the evening was an aerial acrobatics show in Centrum, the atrium of the ship. We got seats in R-bar but as we were under the balcony above the view wasn’t as good as I’d hoped. Nonetheless the show seemed quite good, though in a very odd location with most people having to stand to see the show. It also means the two panoramic lifts in the atrium are shut off for the duration of the show and as they’re the only way to get to the speciality restaurants and Viking Crown Lounge on Deck 11 (other than by stairs) guests with mobility problems may be inconvenienced by this. The show was very short, lasting only about 20 minutes, and honestly wasn’t particularly memorable. Shortly after the aerial show we had the first game show of the evening called Finish That Lyric. Here anyone could participate during the show but the idea was they played a song and when they stopped it you had to sing the next lyric into the microphone.

To start with they had little prizes for getting one song correct, but eventually moved up to better prizes for getting more in a row, all the way to 5 in a row. Lesley won a couple of highlighters and a ballpoint pen (the prizes weren’t that good) by singing one of the early games. I was volunteered to join a team of three others for the 4-song stage of the game show, and won a bingo ticket for the following night! The whole thing was such a laugh, and many people were getting involved, singing & clapping along. Brilliant fun! After this had died down we headed to the main theatre for another gameshow called the Love & Marriage game. I’ve seen this on Celebrity before, but not in the main theatre. The cruise director got three couples up on stage. The newlyweds (9 days), the longest married couple (62 years!) and the craziest couple (who happened to be the mental Welshman from last night and his wife).

The gameshow was done in two stages. In each stage they took one half of the couples away and asked the remaining couple three questions about themselves or the relationship. Their partner was brought back and had to give the same answer. This was absolutely hilarious, and the older couple won the game which was really sweet. It was such a laugh and definitely worth a visit if they run the show on your cruise. Whether you get involved is up to you!!

With a fairly action packed evening Lesley and I had a (comparatively) early night ready for our day in Mykonos! See you there…